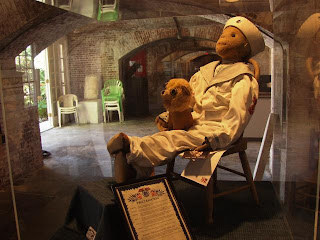 My recent post about the evil doll, Annabelle got me thinking about dolls.  It seems I am not the only one who is afraid of dolls and it also seems like there is a good reason.   The association between dolls or poppets and witchcraft and evil goes back as long as there have been dolls.  During the Salem witch trials,  mere possession of one of these diabolical items was enough to earn you the title of witch.  Dolls, throughout history, have been used in magic as symbolic ties to real people or supernatural entities.   It is not surprising that books are filled with stories of cursed and evil dolls.

The most famous and diabolical of the cursed dolls is a doll named Robert.  Robert was a gift to a young boy named Gene Otto.  The doll was made of straw and was given to him by a maid.  If the legend is true,  the maid was angry at the Gene's family for dismissing her and the doll was actually a voodoo doll designed specifically to hurt Gene and is family.  After the doll was given to Gene,  the family began to notice that Gene had an unnatural attachment to the doll.  Gene took it everywhere with him and spent many hours in his room alone conversing with the doll.   Witnesses say that when they listened in on Gene they heard two voices speaking when Gene was alone in the room with his doll.

Time past and Robert's malevolence grew.   Witnesses began to report seeing the doll moving from window to window.   The Otto's claimed that they saw the doll move and heard him giggle.   Often things in the house would turn up broken and when the Otto's confronted Gene about the incidences he would say, "Robert did it."  Gene began having nightmares.  One night the parents ran into his room and found Gene screaming.   All of the furniture was overturned and Robert was standing over Gene.  The doll collapsed when the Ottos walked in.

Time didn't seem to tarnish Gene's attachment to the doll and even as an adult he kept the doll with him.   Gene remained in his family home with his doll after his parents died.  Gene got married and Robert became a source of difficulties in the marriage and it ended.  Finally,  Gene tried to lock the doll in the attic, which is where Robert was found after Gene's death.  Today, Robert lives in a Key West museum where he is reported to have continued his wicked works.
Email Post
Labels: Cursed Doll haunted dolls Robert Robert the haunted doll

Missy said…
But because of his antics at the museum, Robert The Doll is now locked in a specialized glass case.

Numerous times before then, night guards would notice Robert moved or his posture differently angled. And on a few occasions, even heard what sounded like Robert talking.
August 20, 2010 at 3:59 AM

Jessica Penot said…
That only makes me more afraid of this doll. This doll gave me nightmares last night!
August 20, 2010 at 5:11 AM

Lyn Carioca said…
i dun get it, why everyone seems to b afraid of it?
this puppet is cursed to curse people, if you hadnt do anything wrong, why would it wanna curse you?
and isn't it nice to have him lift up ur curse when you apologize sincerely?
i juxt dun get it why... :/
November 6, 2010 at 7:32 PM

Nurul Hanis said…
Well,some say that if you leave a chewing gum beside the glass,the next morning you will found out that there were only wrappers beside that glass...Scary........
September 20, 2012 at 11:23 PM