The Ouija Board: Good or Bad? 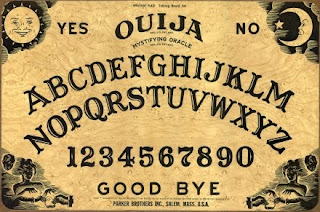 I watched the movie Ouija this weekend.  It wasn't a particularly wonderful movie.  It was one of those movies driven by the utter stupidity of the protagonist.  I did enjoy it, however.  It also made me think about the Ouija Board and its history.
﻿
The Ouija Board was first created during the spiritualist movement of the late nineteenth century.  It was designed as a tool to help communication with spirits.  Elijah Bond and Charles Kennard were the first to patent the device.   In 1966, the device's patent was sold to Parker Brother's who still own it.   Ever since its creation the Ouija Board has been controversial.  The most famous case of demonic activity with Ouija Board was the case that was later the inspiration for a book The Exorcist.  I've blogged about this case before.   A little boy named Robbie and his aunt attempted to contact a deceased relative and the resulting demon possession was legendary.

I remember my first experience with the Ouija Board was fairly typical.  I was at a slumber party and one of the girl's brought out the board.  We all took turns asking questions.  I can't remember them all.  They were mundane girly questions like "will Billy Bob ask me to the dance,"  or "Will I be a doctor when I grow up."   At the end,  the girl who brought the board out told the spirit thank you and said that she would give it all her Halloween candy as a way of saying thank you for all its help.   She put her bucket of Halloween candy by the board and we went upstairs to play light as a feather stiff as a board.  When we returned,  all the candy was gone.  The wrappers were still there.  They were still  sealed, but the candy was gone.  I'll admit,  this could be some kind of slumber party prank, but I don't know how this girl, who was pretty clueless pulled it off.

Almost everyone you talk to has a Ouija board story and almost all of them are bad.  Mine was quiet and stupid, but almost everyone I talk to about the board agrees that it opens doors that shouldn't be opened.   My grandmother passed away recently,  which had lead to much contemplation on her life.   She was a woman who always dabbled in the supernatural and believed firmly in ghosts.  In fact,  she had a relationship with a ghost named Alonk that lasted years via the Ouija Board.  She forced my mother and her sister to help her continue this relationship.  Alonk told her he loved and sent her love stories.   It really creeped my mother out, although my aunt grew fond of Alonk.

There are a million Ouija Board stories.   One local story, involves a teen that used the board regularly.  One night the sofa he stored the board under burst into flames,  burning down the entire apartment complex he lived in.    Another story I found in a book, describes a young man's interaction with a spirit via the board.  During this interaction, the spirit said the board was specifically designed to communicate with those in hell.  Only spirits that had been damned could be contacted using the board.

I have heard a few good stories about the board.   One woman at a paranormal meeting I went to said she talked with a playful girl spirit that had lived in her house before her.  She said the interaction was positive and helped bring peace to herself and her daughter who had been afraid of the ghost before the conversation via the board. I know that some people must be having positive experiences with the board, because it still sells very well.  There is even an online version of the game now that allows you to play alone using your mouse.   However,  the overwhelming bulk of the stories are terrifying.   Which brings me to the question.  Is the Ouija Board a gateway only to evil or can it be used for good?  Are people being swayed by the abundance of negative stories or are there any possible good uses for this tool?
Email Post
Labels: Ouija Boards

The Wolf said…
I've never used one and never will. My mother used one and like me she is very connected to the spirit world. She used one and to this day has never been able to get rid of it. She even burned it in a fireplace and the next day it was waiting for her on the front steps of her house, a little burned but still there.
August 16, 2010 at 6:53 PM

Jessica Penot said…
That is horrifying. I've heard stories like that before but never first hand. I've always read them in books. I wouldn't ever touch them either if I had an experience like that. I don't touch them in any case, because I would rather not take the risk.
August 16, 2010 at 7:39 PM

Andrea Allison said…
I've never used a Ouija board and never will either. Heard way too many bad stories attached to it. Not willing to take the risk.
August 16, 2010 at 9:23 PM

Missy said…
I blogged about this subject a few weeks ago in ParanorMel. And I for one will NEVER use one again after conjuring who we did.
August 17, 2010 at 5:28 AM

Julie Ferguson said…
I didn't have any strange experiences after using one with my friends when I was younger. However, my daughter's friend had all kinds of paranormal activity after she and a couple of friends used it. I wrote a couple of posts on her experiences with the title starting out as "After the Ouija Board..."
August 17, 2010 at 7:21 AM

Anonymous said…
we once played with the ouija, also asking it silly quesitons. nothing weird happened while we were at my friend's house. but that night i had the most terrifying and very realistic nightmare. i don't remember the details, but basically there was a demonic spirit that had come thru the ouija and started following me. i couldn't get rid of it. it was just terrifying and i was so regretful that i had played with the ouija. when i awoke i couldn't believe that it had been a dream, it had been so real. i couldn't shake that fear for a long time. i also started having a lot of health problems after that. all pretty much related to severe anxiety disorder. i can't say that the ouija caused those health problems, but that super realistic nightmare was enough for me to never want to touch another ouija again.
August 17, 2010 at 7:31 AM

Heart Centered Psychic said…
Growing up, someone gave my parents a Ouija as that was all the rage. Friends wanted to play with it. That board went into a garage sale; sealed in the shrink-wrap.

I always knew never to touch a Ouija; some might. I don't.

but yes-yes, to what?

Pam Morris said…
I think it's a fascinating creation. I say this because I've never had a bad experience with it or for that matter, a good experience. I've always thought of it as a tool for collecting the energies of the participants. I suppose that, in itself, could be quite negative. perhaps the lesson should be "be careful who you 'play' with"
August 18, 2010 at 6:20 AM

Erica Ortiz said…
Wow, I can't believe that super strict catholic parents actually allowed me to have one as a child. I was a naive child that knew nothing about the sinister meaning behind the Ouija board, I just heard about the magic 8 ball type hype behind it and wanted to try it out.

Nothing really happened when I tried it with my cousin at the time. Same thing behind the silly schoolgirl questions. I remember it answered something related to DIE, and we threw the board and screamed, but I kind of thought it was my cousin messing with me.

That said, I would never touch another, especially after hearing the many accounts as to its true connection to the demonic.
August 22, 2011 at 11:54 AM

Deb Atwood said…
Such interesting comments! Like others, my only experience was at a slumber party. Nothing happened.

For me, the ouija board brings additional scariness to novels or movies. Reading this post, I flashed on the movie Paranormal Activity in which the ouija board definitely upped the fear factor. I'm currently reading Heather Graham's The Seance, which begins with a ouija board scene as well--though in that case it's a police officer asking for help to solve a crime.
November 12, 2014 at 8:23 AM

Anna said…
While I am fascinated with the Ouija Board, I don't think I'll actually play it. I'll be too worried and scared about what it could lead to.
November 12, 2014 at 7:58 PM

Dean K Miller said…
We had one. I recall only one or two times with friends. Don't recall anything negative but was never comfortable with it, even back then. Definitely keep my distance nowadays.
December 25, 2014 at 11:36 AM

SSam said…
If you enjoy original ghost stories, you may like these stories from India: http://www.amazon.com/INDIAN-GHOST-STORIES-Saptarshi-Bhattacharyya-ebook/dp/B00ON3L6JO/ref=sr_1_2?s=books&ie=UTF8&qid=1420308198&sr=1-2&keywords=indian+ghost+stories
January 3, 2015 at 11:17 AM

Anonymous said…
Ouija is not demonic or a portal. If you don't want to play, that's up to you, but please don't spread garbage like that, or maintain paranoid feelings about it. It's a means of communicating with your subconscious and possibly some other things. These other things are not necessarily bad at all, though I'd recommend putting up protections/praying as you see fit before starting. You might also want to include something like 'none of ill will towards me are invited'. Have played with it dozens of times, including alone, and mostly had little or no response or sometimes decent conversations with what appeared to be a being. Try to develop your intuition, it'll help to determine in those rare cases if you've got a genuine threat or somebody/your own fears screwing with your head.
Remember, even if you get 'kill your parents' or something, you don't have to listen!
January 29, 2015 at 5:30 PM

Jessica Penot said…
Thank you anonymous! I love to hear the positive stories and the advice will be very useful. I know I recently spoke to one medium who said she uses it to train those who work under her. She says it is a very useful tool.
January 30, 2015 at 7:32 AM

Anonymous said…
Our Ouija, as with most, left a positive and negative impression on us. What set it apart from common usage was the communicant's capabilities of instructing us to take paranormal images similar to classical spirit photography, where extras are engulfed in a plasmic surround. The communicant's capabilities should not, of course, exclude whatever physical mediumship we had developed but a partnership.
February 1, 2015 at 12:51 PM