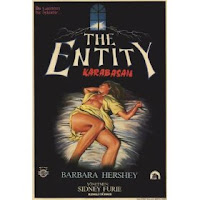 It’s not very often that put much stock into the validity of cinematic fiction. It’s sheer entertainment, which on a deeper level at least makes you think about your own spot in the universe. However, I never really took anything seriously unless it was geared as something of historic relevance. But there was a horror film of sorts that I saw when I was about 13 that, as of late, has proven to be quite true to life.

The Entity is a film shot in the early 80s that is said to be based on true events. A woman is haunted by the spirit of her dead husband in their home. I only mention it to set up some context. Becausethe spirit is that of the woman’s husband, it follows that there is a certain level of intimacy and care with which the “entity” interacts with his wife. As a result, there are some pretty disturbingly fantastic scenes in which the husband’s spirit is caressing his wife, even going so far as to make love to his wife -freaky, I know. But what if something like that were actually plausible? I mean, the film isn’t exactly Oscar worthy; however, it does raise a good question. How intimate can spirits get with their hosts?

Well, I’m here to tell you, quite intimate indeed.

Sporadically throughout the past month, there’s been a presence in my bedroom. I’m not going to say that I’m being haunted. Quite frankly, I don’t know what to think. So, more than anything I’m enlisting the help of some of the readers out there, at least a little bit of affirmation that I’m not, in fact, losing my mind all together. What happens is I’ll be sleeping and drifting between sleep and dream a(http://ghoststoriesandhauntedplaces.blogspot.com/2010/07/guest-blogger-camiele-white-shares-her.html ) a story that I’ve already told. Then there’s a surge of energy --what I can best describe as a sound like an electrical failure, then the feeling of a presence on top of me. Yes, folks...on top of me.

It only gets worse from here.

I’m unable to move, as if I’m pinned down (gently) to the bed. Then something rather unexpected happens. I feel as though this “something” has wrapped itself around me and began to push itself on me, softly caressing my back. I don’t want to get into the gratuitous details, but it is something that’s rather...I don’t want to say frightening, but certainly discomforting. It leads to me wonder if there’s such a thing as travelling entities. I’m no expert; I never would claim to be. So, I wouldn’t know if what I’m experiencing is just the result of lilting between consciousness and the mutterings of dreamspace. Is anyone else aware of any physical contact with misplaced energy? It seems to me that no matter where I am, I come in contact with some sort of something that just seems to want to get close. What are the boundaries of intimacy between us and those things that we can’t describe? It’s a mystery to me. A mystery that I need a bit of help solving, or at the very least, understanding.

Article writer by day, renegade poet by night, Camiele White loves any and everything film. She chases only the original (or incredibly funny) and has been known to talk for hours about subjects that most people just don’t care about. Right now, she gets her jabberjaw jollies writing about Halloween costumes. If you want to give her a buzz, she can be reached at cmlewhite at gmail.com. You can also find her at  http://www.starcostumes.com/
Email Post
Labels: spirits Supernatural Intimacy The Entity

Jessica Penot said…
I agree, definately get help if you get pregnant. That would be straight out of Rosemary's Baby.
August 23, 2010 at 6:42 PM