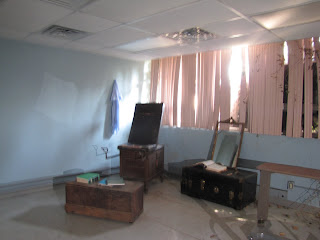 This Friday night I was lucky enough to follow a team of real ghost hunters.  I have played at ghost hunting.  I've done a few EVP sessions and walked around with my little gadgets, but after I spent a night with Southern Ghosts (http://www.southernghosts.com/) I realized that I was just playing.  The team I got to watch was lead by Steve and Angie who are known for their great blog http://www.ghosteyes.com/.  They are the Virginia chapter of Southern Ghosts.  Brett Burchfield from Georgia and Jeremy Morgan were also present during the investigations. 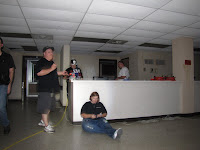 The first thing this team did when they got started at the South Pittsburgh hospital was set up camera's in all the major halls of the hospital with infrared.   They set up the cameras and connected them to the DVRs.  The sheer volume of equipment along made me feel overwhelmed.  Clearly, this was a very serious team.  They then proceeded to explain to all of us non ghost hunter types what we would be doing and we set up a game plan.  The team started in an old waiting room that had been decorated with antique medical equipment and set up for ghost hunters.   Vines crawled in from the outer courtyard through the windows so that nature itself seemed to be reaching into the room and retaking it.   The team started with the first of many EVP sessions in which team members asked questions and waited for several minutes and then asked another question.  This requires a lot of patience, which is something ghost hunters clearly possess in great quantities.

The team then split up and went to the third floor of the hospital.  Trigger objects had been laid around the hospital.  These were balls, boots, or bikes etc.  that had been laid in different locations that had been noted so that if they moved the team could see that something had happened.  They could then check video footage to see what, specifically had happened later.  When we went to the third floor, we noticed one of the trigger objects had moved.   Two members of the group went to the psychiatric ward and continued with what was a very successful EVP session and the rest of us went to surgery to do some psychic experiments.  These were interesting as well and were designed to draw the paranormal energy in the room to one person so they could describe the energy in the room.

The group was very methodical and hours were spent progressing through the hospital doing various EVP sessions.  The most interesting EVP session to me was done in the basement in a room filled with old church pews.   Team leader Steve noticed the ghosts were making the KP meters light up at different times throughout the room as questions were asked and he started asking the ghosts to answer questions by making the meters light up green or red.  This seemed to actually work and a partial dialogue was established using this method.

I was unable to keep up with the ghost hunting team, however, and by 3am I had to leave.  My eyes were drifting shut and I don't drink caffeine so I had to leave, proving once and for all that I don't have the stamina to keep up with the real ghost hunters.  They tell me that after I left they got some very interesting data, however.  I can't wait to hear more, but little Jessica went to her hotel and slept because as interesting as ghosts are,  my PJ's are bed are much more interesting at 3am.   What did I learn from following real ghost hunters?  I learned  that they are some of the most patient people I've ever met.  Not only did they have patience the night of the ghost hunt, but they have to have continued patience as they review hours and hours of video footage and listen to hours upon hours of EVP sessions.   I take my hat off to these ghost hunters, because the reality is,  it isn't the adventure you see on TV.  It is patience and persistence and determination that made this team work.  I'm not sure I have any of those qualities but it sure was nice watching others with it for the night.

You can follow the folks I ghost hunted with on twitter at @GhostEyes_Steve, @GhostEyes_Angie, @RCP_GatorFan .  I know I'll be following them closely waiting for the results from this trip.   I'll also be watching http://www.hauntjaunts.com/ because Courtney Mroch has a sensitive eye and she might have seen a lot I missed on this trip. 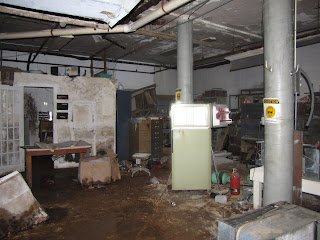 Pam Morris said…
I think I probably would have donned my pj's as well. the place itself sounds so spooky...looking forward to hearing more!!!
August 2, 2010 at 11:20 AM

The Wolf said…
Very cool that you got to do one of these ghose hunts. I've always wanted to do one but they don't really have many of those up here.
August 2, 2010 at 2:02 PM

Courtney Mroch said…
Oh man! You got GREAT pics! I have camera envy big time now after seeing the type of camera you use to get the pics you do. But even if I had your camera, I'm not sure I'd know how to get the good pics you do. you'll see when I post mine on my blog. Your angles, your perspective...it's great. you really captured the essence of that haunted hospital.

And I agree with you...what they do is admirable. I was happy to watch, but I wouldn't have the staying power to do all they do. It's one of the blogs I want to write about that that night inspired.

And again...it was AWESOME meeting you in real life! You are so gorgeous, astute, witty, and just plain FUN! It was an absolute delight to get to have such a haunted jaunt with you!
August 3, 2010 at 1:22 PM

Jessica Penot said…
Courtney... You are making me blush and you are pretty and sweet. You are fun too. It was great meeting you and I hope we get to haunt jaunt again!
August 3, 2010 at 3:22 PM

Unknown said…
I think you would get used to the late nights and do just great as a "real" ghost hunter! So glad you guys had such a great time. SOOOO jealous and I wish I could have tagged along!