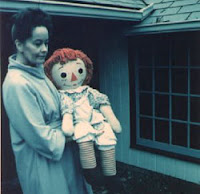 I have fallen behind on my blogging this week and my last post was a pitiful summation of bizarre events  that occured while I was staying in my old family house.  My computer stopped working so I had to post from my iphone.  My pictures were blurred and everything went haywire.  My grandmother died yesterday before we made it back to see her and the only thing that's gone really well this week is my reading, which has gone at breakneck speed.   In the spirit of my flight of fancy,  I will tell a story I found in my favorite new book, There's Something Under the Bed.

Dolls scare the hell out of me so this story gave me nightmares.  This is the story of an over sized Raggedy Ann doll named Annabelle.   Annabelle was a gift given to a young nurse named Donna by her mother.   It wasn't long after Annabelle was given to Donna that Donna began to notice Annabelle moved about the apartment on her own.  Donna and her roommate, Angie, began to notice that they would leave for work and when they came home the doll would be laying on the bed in a different position.   The women started arranging the doll purposely in one position and they would find it with its arms crossed or legs moved.  This went on for some time and after a while the doll became more active.  It would change rooms.   Once, they even found the doll kneeling.  This is a position that is impossible for a raggedy anne doll on its own.

Over time the doll began to leave messages.  The messages were left in pencil on parchment paper.   The women had never owned parchment paper so its origin was as mysterious as the messages themselves.  The notes usually said "help us" or  "help lou".  The women began rigging the apartment to check for intruders.   They thought that maybe someone was tricking them, but there was no evidence of break ins.    One night they came home to find blood on the doll's hand.

Finally, the women contacted a medium to talk to the doll.  The doll said that she was a little girl who had died on the property who was lonely.  After this, the women contacted paranormal experts Ed and Lorraine Warren.  The Warrens believed the story about the little girl was trickery to gain sympathy and that Annabelle was really possessed by a demon.  This belief was confirmed when Angie's boyfriend was attacked physically by some unseen spirit in the apartment.  The attack left a series of deep marks on Lou's chest.

After this,  a priest was called in to do an exorcism.  The exorcism seemed to work and the Warren's offered to take Annabelle home with them.   On the way home,   Annabelle caused the car to veer off the road almost killing the Warrens.  The Warrens dosed the doll in Holly Water and the activity stopped for a time.  Soon after,  Annabelle began to be active in the Warrens' home and they had to move her to their Occult Museum in Monroe, Connecticut.  They keep a website that documents their experiences with Annabelle at http://www.edandlorrainwarren.com/.  The doll has remained active since its placement in the museum and is even thought to be responsible for some deaths since that time.
Email Post
Labels: demon dolls haunted dolls

Sorry for the loss of your grandmother. !!

I think there was an event last year ... maybe Halloween ... where Lorraine and her nephew, John Zaffis, took artifacts from the museum, including Annabel, on the road with them. Which surprised me, because ... well ... obvious. But I just figured they must know what they are doing.

Someone went to the event and there was some weird photo stuff that went on around the doll. The photos were posted somewhere. I think the event included the cast of Paranormal State. It may have appeared on their site. I'll rack my brains and surf a bit and see if I can find the posts. I am pretty skeptical, but the pictures and the anecdote impressed me.

My friend who was a soul rescuer/medium told me that often times the more negative, non-human entities will masquerade as something innocent. ie. on quija boards, which are very prone to contacting things at the lowest levels. He always cautioned that people be very much on their guard whenever communicating with entities ... just as you would not assume a stranger who appears at your door at night is who they say they are and you would not automatically invite them in ... same thing with the spirit world. He did say that if the entity was negative, no matter what the deception, they always trip up and reveal themselves sooner or later. You just have to be saavy.
August 15, 2010 at 8:09 AM

Julie Ferguson said…
First of all, sorry for the loss of your Grandma. Second of all, another reason to be terrified of dolls!
August 15, 2010 at 8:50 AM

Sara said…
So sorry to hear of your grandmother's passing.

Pangs said…
My condolences on the loss of your Grandmother.

Jessica Penot said…
Palemother... wow. Thanks for the info. The more I hear about the doll the scarrier she becomes. I've always been afraid of ouija boards for the reasons you list. I like to know who I'm talking to and I don't need any dark spirits in my life.

Missy said…
My father has a doll in his bedroom that is antique. It's more of a plastic-type, but certainly not of ceramic.

Every time I would go in his room, I'd have to pass by that doll, both going in to and out of his room when I went on a 3-week visit.

It's face was partially squished in *which made it even creepier to look at and go by*. Every time, I got this fearful, and the urge to flee feeling. My heart would literally race as I passed by the doll.

That stupid thing has been deemed via his will to go to my oldest daughter. But the thing is NOT coming in to my home. I'll toss it, sell it, or donate it before it EVER comes in to my home (when the time comes).
August 18, 2010 at 7:44 AM

Jessica Penot said…
Oh no! Nothing worse than being willed the one thing that terrifies you. All dolls scare me. I'm just lucky I don't have any daughters.
August 18, 2010 at 8:25 AM