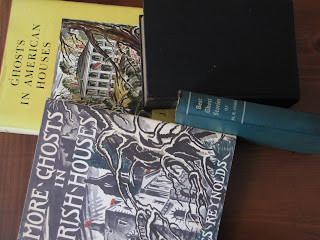 My grandmother used to love ghost stories.  Her passion wasn't in vogue at the time, but she still loved them.  She loved haunted houses and all things old and drenched with history and mystery.  Ghost stories were perfect for her.   When I was going through some of her old things last week,  I stumbled upon her collection of old ghost stories.  She had many volumes and the stories in these old book seem to have a different texture to them than the modern incarnation of the same tales.

This is a story I found in a book that was given to my grandmother by grandfather in 1965.  The story is called Buried in crystal and it is about the haunting of California Street in San Francisco.  According to this story,  there was once a young heiress named Flora Sommerton who was wild and headstrong.   Her parents planned her marriage to a man she didn't favor.  They planned on announcing at her engagement party.   Her mother had ordered an elaborate gown that dripped with crystals for the occasion.

Flora had no intention of marrying and she ran away.  She took some money with her and all her jewelry.  She also took the crystal gown.  In her letter,  she told her parents that she would never marry and that she planned on making her living as a singer.   Unfortunately, as with many such youthful dreams, this proved to be unrealistic.  Flora's parents looked for her tirelessly for many years and every once in a while they would catch a trace of her.  They found an opera house where she worked cleaning.  They found a boarding house where she stayed.  Time passed and Flora's father died never knowing where she was.  Flora's mother grew old and died as well.

In 1926, Flora was found and the missing person case was finally closed.   A woman calling herself Mrs. Butler and working as a housekeeper died alone in her room.   The woman's body was in a most elaborate crystal gown designed by a Paris dressmaker.   The dress served as evidence of her true identity as it was a  one of kind.   According to legend,  The ghost of Flora Summerton still wanders California Street trying to find her way home.   She walks the street at night in her crystal gown forever regretting her decision to leave her home.
Email Post
Labels: ghost stories