What PJ's Does One Bring to Stay in a Horrifically Haunted Hospital? 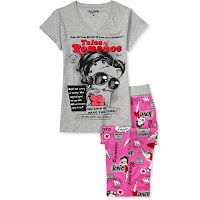 A group of regional paranormal travelers and investigators recently invited me to stay with them at a very haunted hospital in South Pittsburgh's Tennessee. This team includes people that are much more experienced than me.   It includes Jeremy Morgan of Rocket City Paranormal (RCP_GatorFan on twitter), Ghosteyes_Steve, Courtney Moroch from Haunt Jaunts, and GhostEyes_Angie.  This sounded like a fun night so I said yes.   I'm not sure I knew what I was in for.  I think I still don't know what I'm in for.

This kind of feels like that opening scene in every horror movie when the protagonist does something no one in their right mind would do.   That scene when the heroine decides the most haunted hospital in the country would be a great place for a birthday party.  Or the scene when the group of kids decide to go into the old abandoned ghost house on a dare.  I guess I'm that idiot.  The sad thing is, what scares me most is that no one else is planning on sleeping or even bringing Pajamas.  I love sleeping and putting my pajamas on at the end of the day is what I look forward to most in the world, and now I don't even know what pajamas to bring or if I should even bring them at all.

I googled the South Pittsburgh Hospital to try to begin to understand what I was in for and maybe make myself scared of more than the pj situation.   I found an article in which the hospital's owner's son is interviewed and he describes the haunting.  "Telephones will ring when there's no power, you'll have things fly at you, you'll have little girls, as they've caught on tape, saying 'play with me, why won't anyone play with me'," he says.   The hospital has no power and apparently lights still flicker on and off.  Some members of the Ghost Hunter's team did investigation there and found many things that couldn't be explained.

Anyhow,  outside of that,  I can't wait.  I'm hoping that a little girl will ask me to play and I won't be to sleepy to say sure and pull out a deck of cards.  I will be twittering from the hospital all night long.   Friday night is going to be a long night.
Email Post
Labels: Haunt Jaunts Rocket City Paranormal South Pittsburg Hospital Haunting

Pam Morris said…
omg girl!!! In a way, I envy you--also feel rather scared for you! take those pj's...it may have some kind of soothing effect on whatever spirits (and it sounds like there are a good many) inhabit this place. good luck and can't wait to hear about your adventure!
July 28, 2010 at 2:50 PM

Julie Ferguson said…
Hunting in your pj's is fun. Have a great time. I will be looking forward to your report on how the evening went.
July 29, 2010 at 7:17 AM

Courtney Mroch said…
LOL! This made such an awesome post! All I know is I'm hoping I make it through the night and don't bail and hit the Holiday Inn. (I keep repeating, "They're only ghosts, they can't hurt me.")

Very much looking forward to tomorrow. It will be fantastic to meet you in person. I have a feeling we are all going to have a wonderful time.

You wear whatever you like! Above the Norm is correct; no matter what you wear? It's always fun and informative. Sorry for all the delays in reading, replying, posting, etc.; but sometimes I have to '"take care of business!" Both personally and professionally. Have a fabulous time. Something tells me you'll catch a valid piece of evidence. :-0
July 30, 2010 at 5:59 AM

Unknown said…
Jessica, the Hospital has power through out the entire building.
August 1, 2010 at 6:37 AM

Jessica Penot said…
Thanks Cynthia!! I appreciate the info. The lights must have just been turned off at the breaker. I'm not electronic so I let the men folks handle those things.
August 1, 2010 at 11:18 AM

Heart Centered Psychic said…
Laughingwolf; you are too funny! Jessica, I would suggest you might not wear a teddy, especially in light of the fact there will be men investigating, as well! Too many distractions; and there may be no investigation at all! :)

Jessica Penot said…
Brenda and Laughing Wolf..... Why shouldn't I wear a teddy? Maybe more ghosts will come out if all the ghost hunters wore teddies? Of course, sadly, when you said teddy the first thing I thought of was teddy bears. I obviously need to upgrade my PJ collection.
August 3, 2010 at 6:33 PM