No One Dies in Lily Dale 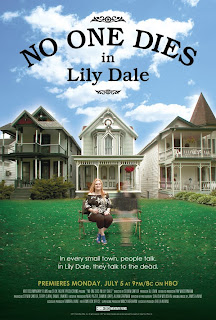 I received some information from HBO asking me to post information about their new show.  The show is called No One Dies in Lily Dale.  I'm not a huge television fan, but something about this show's premise caught my attention.   I went to the show's site and looked at the content on it.  I looked at the trailers and the pictures.  The show is about a town filled with mediums who communicate with the dead.  What was most interesting about this show to me was the fact that the people in Lily Dale refer to themselves as spiritualists.  I have often been fascinated with the early 20th century spiritualist movement and its birth and decline and it is amazing to see that it seems to be alive and well in a small town in New York.  Here is the show's press release;

Located just south of Buffalo, tiny Lily Dale, NY, is home to the world’s largest concentration of mediums, people who claim to be able to communicate with spirits of the deceased. Every year, thousands of visitors from all over the world flock to this quaint Victorian community to have their questions answered and grief assuaged. Directed by Emmy winner and Oscar nominee Steven Cantor (HBO’s “Devil’s Playground”), NO ONE DIES IN LILY DALE follows visitors on their emotional quests, chronicling their mysterious and deeply personal interactions with the town’s unusual residents.

The show will air on HBO on July 5th at 9pm and I think I might actually watch TV that night.  This one seems interesting.

Email Post
Labels: HBO No One Dies in Lily Dale

Jessica Penot said…
Autumnforest... I didn't know about Cassadega. I'll have to find some info on it. Thanks.

magikalseasons said…
Oh I've read a couple books on Lily Dale and it's fasinating history. I think I may like this show too. Thanks for the heads up! Have a wonderful holiday weekend too!
July 2, 2010 at 8:28 AM

Pam Morris said…
they interviewed some of the mediums the other morning on the Today Show...seemed pretty interesting but I didn't catch when the special was going to be on...thanks for the info!
July 2, 2010 at 1:59 PM

Jessica Penot said…
Thanks for all the great comments. Now you've all go me really interested. Zombie Mom I would love to hear your stories!
July 2, 2010 at 10:10 PM

laughingwolf said…
have not watched tv in more'n three years, and this tempts me not, though i'm from the neighborhood [other side of the border, niagara area]... but hope you enjoy
July 3, 2010 at 9:28 AM

Heart Centered Psychic said…
Called the husband while out of town and requested he set the DVR. I haven't yet watched, as I just returned last night. Heard about it via one of the other para/psychic friends.
July 8, 2010 at 11:58 AM