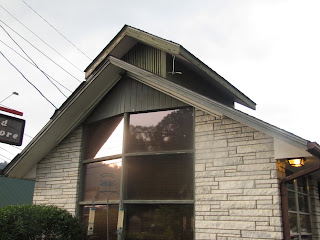 The Story behind the Rocky Top Village Inn captivated me from the very beginning.  It had everything dark and sinister imaginable in a ghost story.  The story began with a group of four men planning a robbery.  They broke into the old office at the Rocky Top Village Inn and held the night clerk and the night watchman at gun point and stole all the money from the inn, but that wasn't enough.   The men saw their weeping victims and wanted more and they took what they wanted in such a violent and perverse fashion that I have been unable to find any descriptions of what they did. It was too horrible to describe.  It is known that the bodies were taken to room 1 and dumped and that the officer in charge found the bodies covered in gunshot wounds and knife wounds.   One of the murderers fled from the crime.  He had only agreed to participate in the robbery.   He left a note and a knife behind him in a nearby phone booth.  In the note,  he apologized for his crimes and said he never wanted to be part of the murders.   A man named tattoo Eddy was the ring leader of this brutal crime and he still sits on death row today.

I went to the Rocky Top Village Inn not knowing what to expect. Exploring haunted places is unpredictable.  Places that should feel terribly haunted seem vacant and places that should seem calm seem like you've stepped into Shirley Jackson's Hillhouse.  I went with some of my girlfriends.  One of my friends is psychic.  She doesn't tell many people this and she would never advertise it, but if you give her a few glasses of wine she opens up about it.  She agreed to go with me and help me explore my haunted locations.  I can sense some things, but I am no where near as gifted as she is.  With a glass of wine in hand, she once predicted my mother-in-laws death.

When we pulled into the back parking lot of the inn, my friend didn't want to get out of the car.  She hesitated.   It wasn't just the ghosts.  The Rocky Top Village Inn is a pretty low brow motel and seedy people eyed us from their perches on the banisters above us as we crept out of our car, but even if the motel had been empty, she would have hesitated. The ghostly presence at this haunted motel was tangible.  Finally, we all got out of the car and explored the dingy, old motel.

The motel looked like it had been built over several decades and the two halves of the motel didn't match at all.  There was a newer portion with a more modern office and a pool.  It was still green and off putting, but in a general motel sort of way.  The other half of the motel was much older and made from stone.   It was in the old office here that the murders were committed.   My friends and I wandered the grounds of the motel and I took pictures of the office and room number one.  My psychic friend shifted uncomfortably and described the feeling coming from the building as beyond bleak.  She wouldn't stay long.  We left as soon as the pictures were taken.   It began to rain as we fled the scene and lightning painted the blackening sky.  My friend broke into a jog and we fled so quickly I felt like we were being pursued by something I couldn't see. 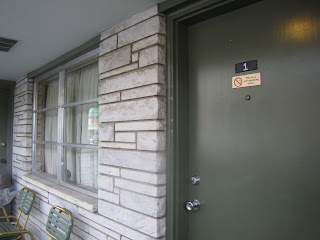 Pam Morris said…
ahhh! I want to hear more! this one sounds like they could make a terrific ghost movie...what did your friend say about everything after you guys had calmed down a bit?
July 20, 2010 at 7:16 AM

Jessica Penot said…
My friend had a glass of wine and tried to be nice. She is a very nice person, but she did say if we went looking for ghosts again she wanted to go to more places like the Greenbriar. She felt whatever was left at The Rocky Top Village Inn was very unhappy.
July 20, 2010 at 7:21 AM

Courtney Mroch said…
What a great Haunt Jaunt! So glad you got to go and that your friend agreed to go with you. Sorry she encountered unpleasantness though. I agree with Pam...makings of a great horror/ghost movie. Oh, and I really dug what you said here "Places that should feel terribly haunted seem vacant and places that should seem calm seem like you've stepped into Shirley Jackson's Hillhouse." AGREED!
July 20, 2010 at 8:58 AM

Dave the Dead said…
So glad I found your blog! I am thoroughly enjoying reading your entries, and it has helped spark my imagination.

Unknown said…
I'm gonna have to make a list of all these places and take a road trip!

You find the coolest stuff!