Searching for Ghosts and Tapas at Church Street Station 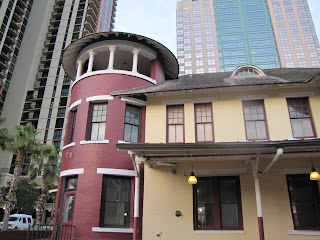 I had planned on meeting with Orlando Ghost Tours last night.  I had read very good things about them online and they had a nice website.  I called them several times and their recording indicated that they met at the Church Street Market every night at 8:00pm.  Their website has had some malfunctions, which resulted in their tour schedule being down and since they never called me back I just took a leap of faith a went down to Church Street Station at 8pm.  I trusted that the message that was left at their phone number spoke the truth.  We waited for some time, asking random strangers if they were with the ghost tour, but no one showed up.  We were sad and somewhat disgruntled, but the Church Street Market was bustling with life, clubs, and restaurants and I have never been one to waste a night without children.

The market place was situated around an old abandoned train station that immediately caught my eye.  I took a plethora of photos and then we skulked about until we found a fabulous place that served tapas and cocktails.  After a few drinks,  I was convinced the train station was haunted and my poor husband had to drag me out of the train station before I killed myself.   We went home and I got on the computer and found out several interesting things about the old station.

The station was built by the South Florida Railroad in 1889.    The SFR was then bought out by Plant System in 1893 and taken over by Atlantic Coast Line Railroad in 1902.  Of course none of this is that interesting.  In the 1970's and 1980's, long after the railroads had closed.  The Market Street area became a hot spot for local clubs and restaurants.  The station was then converted into a club and then served as several restaurants. It was very popular for a good period of time and the area became second only to Disney itself in Orlando's most popular area category.  However,  a steady decline followed and the station itself eventually fell into disrepair and was abandoned.  Many of the buildings that are part of its complex, remain active and are still popular.

What's interesting about all this is that in 2005 the station was leased by the Chungs, owners of Amura Japanese Restaurant.    They leased the property with the intentions of renovating it and placing their restaurant there.  They reneged on their lease and when the owners of the property sued them,  the Chungs claimed that they couldn't use the property because it was too haunted.  This was their actual legal defense.  Apparently, the owners of the station offered to bring someone in to exorcise and cleanse the station, but the Chungs refused.  The owners of the station used this as evidence that the haunting couldn't be the main problem.  They also argued that the ghosts had never been hostile so they didn't think it could be the cause of breaking a legal contract.    Apparently,  tales of ghostly hauntings in this area are numerous.  There have been ghostly bar tenders and dancers seen and contractors renovating the building claim to be very familiar with the haunting.  None of this had been made known to Chung, however

So,  even though I never found my tour, at least I found some ghosts who were active enough to fuel a major lawsuit. 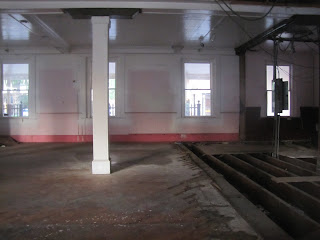 Julie Ferguson said…
Perhaps someone will buy the place that might find the ghosts an interesting addition to their business.
June 6, 2010 at 10:12 AM

Courtney Mroch said…
LOL! Is this what you were referring to in your comment on my post about ghost tour dos and don'ts? Oh man! Well, that sucks you didn't get to take the tour, but you spun it into a great post.

And all I can think is...what if you had been a bit more unscrupulous? What if others showed up for the tour and you'd said, "I'll give it" and took their money and made stuff up? Got me wondering if it's ever happened...
June 8, 2010 at 9:41 AM

Ray G. said…
Some years back, I owned a Jani-King franchise and we had a commercial cleaning contract for Howl At The Moon bar in Church Street Station. I had to come in and cover for our regular employees one night alone to clean the bar after it closed. While sweeping the floors, I saw shadowy man walking inside the bar heading for the back office (I was the only person there and the door was locked, the time was around 4:00AM) I told the man "Can I help you" and tried to get him to stop by also telling him "excuse me sir". He would not stop and I tried to catch up to him until he rounded the corner to the hallway where the locked door to office was, he ,or it, vanished into thin air. I was so alarmed, I would have left if I was only an employee, but I was co-owner of the cleaning business and had the responsability for finishing the job. I continued working and tried to forget what I had seen, until around 7:30 AM, I was wiping the mirror in the men's bathroom, when I saw someone walk behind me, and when I turned around there was nobody there. I had enough, and ran out of there, and didn't even finished the job. I left a message for the bar's manager apologizing for not finishing. I never set foot in that place again, and eventually got out of the commercial cleaning business. It wasn't until years later that I found out about Church Street Station's history and that other people had also witnessed paranormal activity there. Belive what you want, but I know what I saw, and I will never forget it for as long as I live.
November 12, 2011 at 11:34 PM