Gifts from the Dead 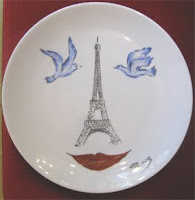 My mother-in-law, Nicole, died nine months ago. Her death was wrapped in chaos. Nicole was French and she lived in between France and the states. She died in France and my husband immediately left to clear up her affairs there. I stayed behind and cleaned out her apartment, most of which still sits in boxes in a storage unit. Bags were sent back from France and we went through them, giving gifts she had purchased in France to her friends in the states. The funeral came and went and her ashes still live with us. Off and on, we've felt her presence here. She has many reasons to be here. Her grandchildren are here, her things are here, and her ashes are here. We miss her. She and I fought like cats and dogs, but I miss her. The children have already begun to forget her. Their memories are short and fade quickly.

Yesterday, as I sat typing, a sonic boom erupted from my closet. I jumped and then went to see what had happened. A box had fallen off the top shelf of my closet and its contents had spilled all over the floor. Shoved hastily in the box, was a bag with Tin Tin on it and French writing. Inside the bag, were Nicole's last gifts for the boys and my husband. I had packed them up in my haste without even opening them. I gave the gifts to the boys. French comic books and picture books were objects of delight. For a moment the boys forgot she was dead. They asked where she was and then they remembered. They remembered the grandmother that always showered them with gifts and love. My husband found the French T-shirts she had bought for him and sat down to read to the boys in French. It was good to hear French again. Since she's been gone, the language has become a ghost. In the box, there were also little things for me, some kitchen towels and a calender. The gifts were wonderful and it was like she was with us again.

It is possible that the cat knocked down the box or something explainable happened to disrupt my poorly stacked closet, but I like to believe that Nicole knocked the box down and guided me to the gifts. I like to think she is still giving and reminding us of France, even now that she is gone. Her ghost is here and it whispers to us so we don't forget where we came from.
Email Post
Labels: France Ghosts Gifts

Sharon Day said…
Well if you two had a passionately head-butting relationship when she was alive, she would have to shake it up for you when she passed on too. Nothing subtle for her! That's a wonderful story. Glad ya'all got your gifts.
June 22, 2010 at 12:48 PM

Pam Morris said…
very cool story...I'm sure your mother-in-law's spirit is feeling a bit more relaxed now that you've found the gifts...and even if the cat did knock the box down...interesting that it was that particular box that came down!
June 22, 2010 at 7:52 PM

Heart Centered Psychic said…
Sorry for your loss; but am happy your family got the gifts. And I'm not sure what it is with mothers and daughters emotionally headbutting?
But all I can say is, "Been there, done that."