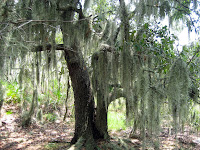 This story was told to my by a native Southerner.   She heard it while she was travelling in South Carolina.  It is pure Southern folklore at its best.  The story begins with a young couple that were new to this nation when this nation wasn't really a nation at all.  They were pioneers travelling to a new world occupied by hostile forces and unknown people.  But they were also escaping the old and they had each other.  They were a French couple and they had just built a house in Charleston, South Carolina.   They planned on getting married and moving into their new house on their wedding day.

The young woman was beautiful in her white dress with her flowing blond hair.   People came from all over to see her on her wedding day.  Unfortunately,  the local natives came as well.  They came with the intention of driving the European settlers out of Charleston once and for all.  They killed everyone they could and they scalped the young bride and hung her scalp from the tree above her house.  Time past and the natives reclaimed their land.   As time past,  the hair began to gray and change as if the young bride were still alive.  The natives became afraid that her ghost was haunting them.  Not only did the hair gray but it thickened and it spread and as it spread the natives became sure that the ghost of the  young bride was coming to take her revenge.  They fled the tree, but the hair grew on all the trees.  It spread from tree to tree as if it were chasing the bride's assassins.

Finally, the natives fled the region and the Europeans reclaimed it.  The bride's hair remained as a reminder of what had happened. It thickened and darkened and became the Spanish moss that hangs from so many trees in the South today.
Email Post

Chris 'Frog Queen' Davis said…
Oh, thanks for sharing. I love those type of stories!!!

Pam Morris said…
another good one. I was half-way through before it dawned on me that the hair would become the moss on the trees!
June 29, 2010 at 7:13 PM

Jessica Penot said…
It took me a while too. I was listening to this lady tell me this story and I didn't get it until the very end. I love Southerners and their stories.
June 29, 2010 at 8:41 PM

Pam Morris said…
well, since I live in southern Virginia on the border of North Carolina--I know exactly what you mean! really wonderful stories and the way they tell them is so cool!
June 30, 2010 at 2:24 PM