Drag me to Hell and The Demon Dybbuk 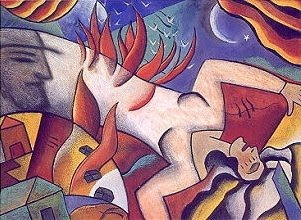 Dybukk by Elly Simmons
Drag me to Hell is one of my favorite horror movies.  It hearkens back to the good old days when Sam Raimi made films that masterfully blended horror with subtle humor to make camp classics that are so good I watch them annually.  Evil Dead and Army of Darkness will always be two of my favorite films.  Like these to films,  Drag me to Hell is a movie I can watch again and again. In this movie,  an angry old gypsy lady curses the lovely blond heroin by calling a dybbuk to drag her to hell.   However, the dybbuk the evil gypsy lady sets onto the lovely blond heroin is not really a dybbuk.  She calls the demom a dybbuk, but  a dybbuk is nothing like the demon of death and destruction seen in this film, but in many ways, it is just as terrifying.

In truth a dybbuk more closely resembles the demon from The Exorcist.  Dybbuk comes from the Hebrew word meaning "cleaving" or "clinging".  It is a creature from Jewish folklore that is a wandering, evil spirit that enters into a person's body and clings to it.  It possesses its victim and torments them from the inside.   It was believed that the Dybbuk could not enter the body of a good person and could only possess a sinner.  Some believed that a dybbuk was the soul of a person who had not been buried properly and became a demon.   The Kabbalah contains instructions fro exorcising a dybbuk and these types of exorcisms are still performed today.  When the dybbuk has been driven from the body of the possessed, it leaves the body via the pinkie toe and leaves a small mark as evidence of its visit.