The Horrible Ghosts of the Old South 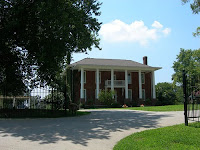 I've been very tired lately.  I have been working hard on the deadline for my Haunted North Alabama book and between that and my day job,  I think I'm not sleeping at all any more.   Sleeplessness has its benefits, however, and one of those is that I have been reading more and more ghost stories.  I discovered a brilliant story and utterly tragic story recently.  I am including all the details for in my book, but I just can't help writing a little about it here.

I discovered an old plantation house deep in rural Alabama.   The house was built sometime prior to 1850 and housed several hundred slaves and their white masters.  The slaves lived in cabins around the  plantation and the masters lived in an exquisite mansion with imported marble.   Apparently,  these particular masters were more cruel than most and the neighbors spoke in hushed tones of how brutal they could be.  Their cruelty was so severe that the descendants of those that gossiped about this still know the stories.   When the slaves misbehaved they were chained in the basement and beaten and tortured.

The Civil War came and went and when it went the slaves were all free,  but the ex-slaves couldn't forget.  They couldn't forget nor could they forgive.  They joined together and murdered their masters in their beds and ran off into the night.   Southern justice couldn't let such an act pass.  So the Klu Klux Klan joined in and the ex-slaves were hunted down.  Lynch mob justice was delivered to the poor, tortured souls and, according to legend,  they were hung from the tree in front of the house.

The ghosts of the masters and the slaves still haunt the house today.  Their cries fill the night with their torment.   The house seems to be cursed because other tragedies have filled the house with many other ghosts that I am saving for later.
Email Post
Labels: Haunted Houses Slave Ghosts Southern Ghosts

Pam Morris said…
yes, please don't tell ALL your stories...I want to be surprised with your book! I would think this would be a very scary place to spend a night in--a place where so much pain and misery occurred would surely have spirits lurking about--even if they were just in the form of an eerie, unpleasant atmosphere!
May 18, 2010 at 2:44 PM