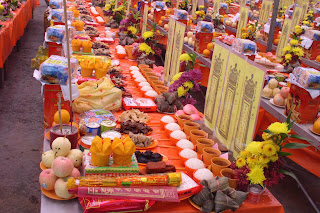 I spend a considerable time telling ghost stories and travelling to haunted locations.   I travelled to some of the cemeteries I visited in Chicago with a Taiwanese friend.  After we left the cemetery,  he laughed and said that his mother would be very mad at him for his careless wandering of the cemetery.  He explained that in his culture after you leave a cemetery, you must go to a temple and cleanse yourself or you risk bringing a spirit home with you.  This got me to thinking about other differences there might be in perceptions of ghosts in between cultures.   In my search for cultural differences I discovered the ghost festival.

The Ghost Festival is celebrated during the seventh month of the Chinese Lunar calendar.  It is also called the Hungry Ghost Festival in some regions.   During this month, the gates of hell are opened up and ghosts are free to roam the earth where they seek food and entertainment.  The ghosts are ancestors of those who have not offered any tribute to them.  They are also ghosts of those who died and were never properly disposed of.  They have long thin necks because they have not been fed by their family. During this time,  family members pray to their deceased relatives and burn joss paper. In the underworld paper items hold value, which is why they burn it as offering to the ghosts that have come from the gates of hell. The afterlife is very similar in some aspects to the material world, and the paper effigies of material goods would provide comfort to in the afterlife. People would also burn other things such as paper houses, cars, servants and televisions to please the ghosts.


Families also pay tribute to other unknown wandering ghosts so that these homeless souls do not intrude on their lives and bring misfortune and bad luck. A large feast is held for the ghosts on the fourteenth day of the seventh month, where everyone brings samplings of food and places them on the offering table to please the ghosts and ward off bad luck. So i seems,  in many Eastern cultures ghosts are treated with much more respect than they are here.  The living are careful to care for ghosts and to make sure that ghosts are given what they need to prevent hauntings.  This seems so very foreign to our culture here, which views ghost stories as fairy tales and folk lore.    I like the Asian perspective.   The picture above is some of the offerings that have been left during ghost festival. 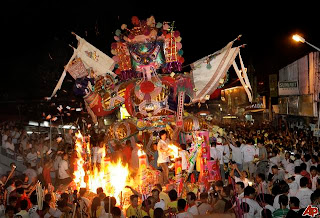 In this photo Chinese throw paper money into a fire in front of a King of Hell statue during the Hungry Ghost Festival in Bukit Mertajam, northern Malaysia.
Email Post
Labels: The Ghost Festival

Sharon Day said…
That was really a neat education! I am always amazed by how different people can have such vastly different beliefs. People ask me all the time why I don't worry about bringing home ghosts, but I don't believe I can. In another religion or culture, I might believe it and that would make it true for me.
May 22, 2010 at 9:49 PM