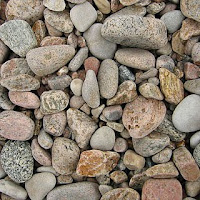 Stone-throwing poltergeist phenomena cases date back, at least, to 530 CE when it was recorded that Deacon Helpidium, King Theodoric of the Ostrogoths’ physician, was besieged by stones.   One of the more interesting cases of stone throwing poltergiest activity is the Grottendieck case.  In 1903,  a Dutch engineer living in Inodonesia, Grottendieck,  awoke to a storm of rocks falling through the roof of his hut and hitting him in the head.  Of course,  this was concerning to Grottendieck who awoke a servant to help him figure out the origins of the rock storm.  They explored the outside area around the hut and they found nothing that explained the rocks.  Inside, the rocks continued to fall.  They also began to change directions and started falling horizontally.   Grottendieck was perplexed, but the serving boys was horrified and he ran away into the jungle.

No sooner had the boy fled than the rocks stopped falling.  Grottendieck saved several of the stones and went to be. Grottendieck published a story on this incident in the Journal of the Society of Psychical Research.  His hypothesis was that the stones had been sent by the ghost of his dead sister who was trying to communicate with him from beyond the grave.   Many other researchers disagreed and believed that the rocks were a product of poltergeist activity brought on by the serving boy's subconsious mind.  There was never any consensus on the cause of this strange case and people still conjecture as to what might have causes the strange falling stones.
Email Post
Labels: Grottendieck poltergeists Stone-Thrower

Sharon Day said…
I was always intrigued by this phenomenon since I saw "The Haunting" and they mentioned that Elenaor had the phenomenon happen to her as a child. I thought--wow--that's as good as when it rains fish. Seriously interesting.
April 29, 2010 at 7:27 PM

Jessica Penot said…
Eleanor is the first thing I thought of with this phenomenon too. It was such a great start fo her character.
April 30, 2010 at 5:05 AM