The Phantoms of Flight 401 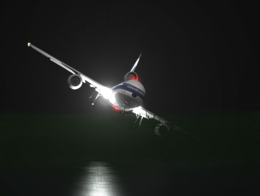 
American Airlines Flight 401 crashed into the Everglade on December 29, 1972. One-hundred and one people died in the crash. Captain Loft survived the impact, but died as they were removing him from the aircraft. Another gentleman, Officer Repot died one day after they removed him from the airplane.

In a desperate attempt to salvage some of what they lost, Eastern Airlines salvaged much of the airplane and redistributed the parts among other aircraft in their fleet. Not long after the redistribution the sightings began. People reported seeing the ghosts of Repot and Loft in the planes that had received spare parts from Flight 401. Repo’s ghost was said to appear often. He appeared in the cockpit and the galley and seemed to be very concerned about safety. He pointed out fire hazards and safety concerns to whoever was present to listen. Loft’s ghost was also seen sitting in first class. One stewardess reports seeing him and thinking he was a stow away. She reported him to her Captain. The Captain recognized him immediately and then Loft vanished before his eyes. There were numerous reports like these from the dozens of planes containing 401 parts. The reports became almost epidemic.

Eastern Airlines rejected these claims and referred employees making them to see a counselor. When these stories didn't stop Eastern  Airlines threatened to fire anyone who told ghost stories about flight 401.   Despite their consistence rejection of the notion that the pieces of flight 401 were haunted, they finally did remove all the salvaged parts from their fleet. As soon as this was done, the sightings ended. A book was written about this very odd haunting called The Ghost of Flight 401. John Fuller wrote it. I haven’t read it yet. It is an older book, but I’m going to definitely put it on my list of reads.
Email Post
Labels: Airline Accidents Flight 401 Ghosts

Courtney Mroch said…
OH WOW! Awesome story, Jessica. I never heard this one before. Spookilicious!
May 7, 2010 at 9:11 PM

Unknown said…
I read the book and many reports about the crash, plus robert marquis, beverly reposa,trudy smith, and ron infantino. U were right when you said this story is unique. Not only the ghosts, but also the reason for the crash.
October 22, 2010 at 10:17 AM

Ibis said…
My dad worked for Eastern Airlines,and I remember him telling that one night he was working in the cockpit of a L-1011 when he encoutered a man in a white shirt with the airline insignia who told him do not use the part because the plane would be in trouble. My dad was startled by his demand, asked him who he was and the man simply walked away, in a instant while my dad was picking up his tools the man vanished. My dad listened for some reason, he put in another part and returned the one he had which turned out to be a recalled part from the airplane that crashed. My dad told his story to a few co-workers but the management had ordered employees not to talk about it otherwise they would be terminated. My dad always said that it Repo the flight engineer who he saw that night.......
April 22, 2012 at 6:01 AM

Varunn K Sharma said…
Nina Linda.. thank you for sharing your dad's experience.. indeed the whole thing is spooky.. but on the other hand my heart aches every time I read stories related to the ghosts of flight 401, for that they must have had a guilt during their last breaths post the crash that they were responsible for the crash... so they decided to prevent future crashes by helping crew members even after they were dead.... so tragic... ;(
August 27, 2012 at 7:16 AM

“There are also souls, neither in heaven, purgatory, nor hell, but wandering the earth in trouble and anguish, aiming at something they are bound to perform. They haunt deserted places, ruins, tombs, and the scenes of their past misdeeds. They are spectres.”

“In her youth near their house was a piece of ground where nothing grew. She never crossed it without a shudder and once saw two black shadows wandering about. Her father said that in the Seven-Years War, an innocent Hanoverian soldier had been condemned and executed on that spot. Two enemies were the author of his misfortune. Forcing herself from fear, she went there at night to pray (for him) with arms extended. The second time a horrible phantom in the form of a dog appeared and another time she was lifted up violently as if about to be cast in a ditch. But she renewed confidence in God and exclaimed: " Satan, thou canst not harm me!" and he ceased his attacks. She never saw the two shadows again and from that time all appeared quiet. Compassion knows neither time nor space.”

Mother Mary of Agreda, a saint, bilocated more than 500 times from Spain to Texas, in the early 1600's to instruct American Indians.

St. Christina the Astonishing, woke from death at her funeral, levitated and could smell the sin on people.