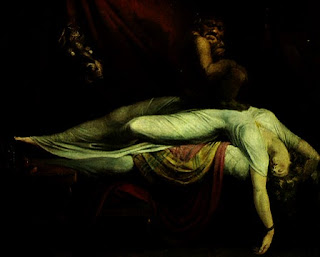 Freud's theories  about dreaming suggested that dreams were a way of acting out inner conflicts while staying safely inside our own minds, rather than display our ravaged psyches in the bright light of day. Thus, he reasoned that a "successful" dream - one that was not too traumatizing for the warring superego and id without the guiding conscious hand of the ego - was a dream in which the dreamer stayed asleep. Thus, a "nightmare" (a dream in which the dreamer wakes due to his or her own influences during sleep) was an unsuccessful dream, in which the inner war had become too violent and could not be brought to a successful conclusion.   Modern psychology suggests that nightmares are the result of the random firing of neurons during sleep.  The mind,  needing meaning,  interprets this firing  with images and feelings that are familiar to it.   Thus nightmares are the product of random neuronal activity in conjunction with the anxieties and worries that the dreamer clings to.

Nightmares are the a halmark of certain pscychological disorders,  like PTSD.  Often,  these nightmares are treated with medications that produce deep,  dreamless sleep and thus erradicate the nightmare.

Long before modern psychology or Freud,  people suffered from nightmares.  They awoke screaming or with feelings of something crushing them or holding them to the bed.  In most cultures,  these things were blamed on demons and bad spirits and many still blame such symptoms on bad spirits.   Historically some of the better-known spirits of this sort are; Greek ephialtes (one who leaps upon) and mora (the night "mare" or monster, ogre, spirit, etc.), Roman incubus (one who presses or crushes), German mar/mare, nachtmahr, Hexendrücken (witch pressing), and Alpdruck (elf pressure); Czech muera, Polish zmora, Russian Kikimora, French cauchmar (trampling ogre), Old English maere (mab, mair, mare-hag), hagge, (evil spirit or the night-mare--also hegge, haegtesse, haehtisse, haegte); Old Norse mara, Old Irish mar/more, Newfoundland Ag Rog (Old Hag), and the Spanish pesadilla.  All of these evil spirits entered dreams and possessed the mind and body of the sleeper.

As I talk to many people who have been tormented by more malevolent hauntings,  they have described symptoms of crushings and pressure while they were asleep that was commonly associated with many of these bad spirits.   The people I interviewed believe that these symptoms were caused by demons or bad spirits.  We know many bad dreams are what psychologists say they are.  They are anxiety and life stress seeping over into our resting minds.  However,  is it possible that these historic interpretations of nightmares aren't all wrong?  Is it possible that some nightmares are caused by these old demons creeping up into our beds and pressing down on us while we sleep?
Email Post
Labels: Bad Dreams Demons Spirits Folklore History Nightmares

Sharon Day said…
Dreams and ghosts interest me a lot. I've had sleep paralysis, night terrors and when I interview people who are having haunting issues, when they mention these things happen when they're in bed, I can't take any of those stories as proof of ghosts. There is just too much weird stuff that happens in the semi-awake/semi-asleep state. I've always looked at my dreams and realized that the content could vary depending on what happened that day or what I read or watched on TV before I fell asleep, but what's consistent is that how I react to what's happening in my dream says a lot about how I feel I'm handling life. If I run and scream and can't come up with a plan--I'm in a bad spot in my life where I'm really feeling like I'm reacting and not taking control. My dreams mostly now are end-of-world and I'm the only person who can lead people and help them make decisions. I calmly and logically delegate what they should do while they're all hysterical. I think it says I feel like I'm the only person with a level head with the folks I'm around. I've never had a dream that didn't show how I feel about myself and my coping skills at that time. I always say--it doesn't matter what happens in the dream, it matters how you handle it--that says how you're doing internally right now.
April 7, 2010 at 7:59 PM

Jessica Penot said…
I agree absolutely. It is how you deal ith it that matters. I think one of best treatments for dealing with nightmares is to take control of the nightmare. When you wake up, finish the dream in away that gives you back control and over time you'll have control in your dreams. I remmber you said you had night terrors in one of your blogs before. That is a very rare thing for an adult. Another thing that makes you unique!
April 7, 2010 at 8:07 PM

Sharon Day said…
Yeah, the night terrors probably occur about once every 3-4 years. It's always the same thing, a gray face leaving over me and I start screaming, kicking, fighting. Poor hubby! My heart beats wildly and it's the most animal-like basic terror imagineable. Then, I usually end up hearing my screaming or hubby's voice breaks through it and I awaken. My son got them as a kid too. It seems to run in the family. I was actually in a book "Control your dreams" because I have an ability to lucid dream. If I don't like what a dream is doing, I control it and turn it around. I seem to know I can arrange and rearrange things as I please. The only exception is the plane disaster premonitions. Those, I know I can't be killed, but I am aboard the plane and see how it goes down. Most of the major airline disasters I dreamed a day to two days beforehand in extreme detail. I used to keep notes of them for a therapist I was seeing and she would have me call her to tell her I had one because in her notebook, she kept my dream details then days later the newspaper report and she flew a lot, so she wanted to know. In those dreams there is lucidity because I know I'm a witness and that no one around me sees me. Very creepy! Hate those!
April 7, 2010 at 9:55 PM

Jessica Penot said…
That is creepy. It is interesting too. It seems that there would be an interesting story in your dreams. I often take my nightmares and turn them into short stories, your dreams would certainly have great potential for that.
April 8, 2010 at 8:47 AM