Looking for Homer's Ghost in an Abadoned Hospital 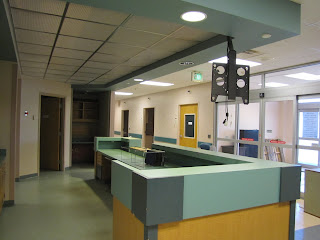 I went exploring today.   I travelled to Cullman, Alabama to find the ghost of Homer who lives at the          abadoned Woodland Hospital.  We found the hospital easily and spent an hour or so wandering the  grounds and photographing the hospital.   We saw no signs of Homer outside of the hospital, but  it would  have been hard to see anything malevolent on such a beautiful spring day.   After much exploring,  we found an open door and asked a construction worker if we could come in and look around.  The workers have been renovating some parts of the hospital in hopes that they can find new tenants for the building.  The worker let us in and we were able to wander the quiet, empy shell of a hospital for some time.  We saw no evidence of any other workers and the quiet was beyond unnerving.   Finally, the foreman came stomping down the hall and told us we had to leave immediately.  He seemed quiet angry and he escourted us out with a frown and a wag of  his finger.
Although I saw no sign of Homer at the hospital,  as I reviewed the pictures I stopped when I saw a picture of myself taking the picture reflected in the glass.  What sent chills down my spine was that there was              someone standing behind me in the picture and I had been very alone when I took it.  The picture is at the bottom of the page. 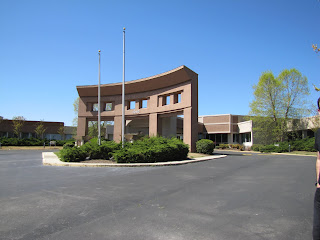 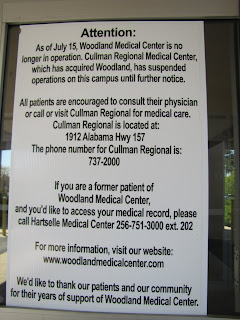 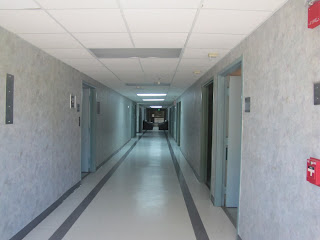 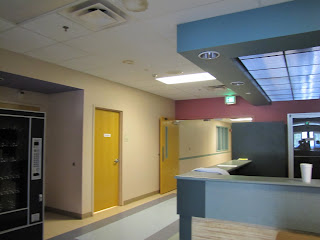 Nate said…
Creepy place - something about hospitals really freaks me out. That bottom photo is very interesting, too. I see what I think you're talking about: in the mirror at the right of the frame, right above the cup? Looks like two people. Not sure what to make of it, but its definitely cool :)
April 9, 2010 at 6:08 PM

The Wolf said…
I used to work for a telephone company and had to set up internet cables in a hospital. When I was working alone above the intensive care unit I would see things every day. Once I was confronted by an old man in a hospital gown who vanished in front of me. The second time I was chased by a dark spirit that looked like a repair man with a wrench. Needless to say I don't like hospitals.
April 10, 2010 at 6:14 PM

Anonymous said…
i worked there 2 years, yes there is something there, everyone laughed and joked about homer. He is there....it is real....no kidding
November 9, 2012 at 6:47 AM

Anonymous said…
My mom used to work there for a long time. Sometimes, when she had to work late, she would hear doors opening and closing, and toilets being flushed. She always heard stories about homer there, and while people joke about it, my family and I believe my mom. She would never lie about this.
October 21, 2013 at 5:33 PM