The Legend of Seaweed Charlie: A Photographic Journey Though Cavalry Cemetery 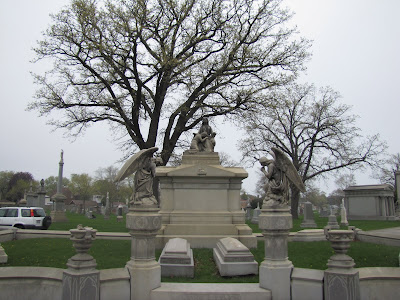 According to the Daily Northwestern, In Evanston, the dead overwhelmingly outnumber the living.
The living  in this suburb of Chicago are about 75,000 souls.  However, 218,000 people lay buried underneath Calvary's 92 acres of superb lakefront property.  These posthumous residents include some of the most accomplished people in Evanston history. Among the more elusive dead who inhabit the area is a World War II-era pilot known only as "Seaweed Charlie."

Local legend states that Charlie crashed into Lake Michigan during a training exercise and drowned. He is fabled to crawl out of the lake at night, dripping wet and covered in seaweed, cross Sheridan Road, and disappear as he enters the cemetery.

A story in The Daily Northwestern discusses Seaweed Charlie.  Here is part of that story:
Cemetery clerk Tom Berry says it's a fact that Navy pilots trained over Lake Michigan during WWII and that some crashed, but beyond that, he really doesn't buy the legend.


"Just about every cemetery has some ghost story associated with it," he says.  "People always look for something to make up to be scary."


But Chicago historian and supernatural explorer Richard Crowe has gathered some "very consistent" witness accounts of one of Seaweed Charlie's appearances in 1993.  That year, two Columbia College students driving south on Sheridan noticed as they neared the cemetery that the cars ahead of them were swerving wildly. Then, Crowe says, they saw a tall and thin, glowing figure crossing the road toward the cemetery, wearing a heavy coat and apparently unaware of the traffic.


Crowe thinks the ghost could be a flight instructor from Glenview Naval Air Station, about seven miles south of Evanston. A pilot crashed in Lake Michigan near NU's Evanston Campus on May 4, 1951, and washed up two days later near Calvary -- the south Evanston coastline is "a natural catch basin for flotsam and jetsam," Crowe says.

I am staying in Evanston tonight.  I drove by Cavalry Cemetery several times last night.  We drove slowly and looked at the lake and cemetery and saw no sign of the ellusive Seaweed Charlie, so we returned in daylight to wander this breathtaking necropolis.  It was quiet and we were the only visitors.  A lonely coyote prowled the grounds.  He seemed oddly out of place in  Chicago, but he seemed happy amongst the dead.  Although there were no ghosts,  the gravemarkers were impressive enough to speak for the dead.  I was awed by the enormous beauty of many of the markers below. 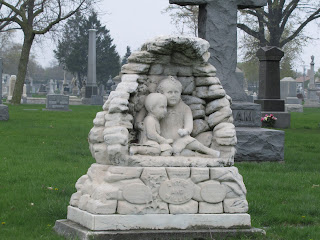 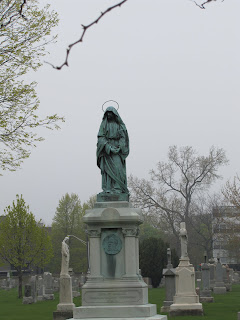 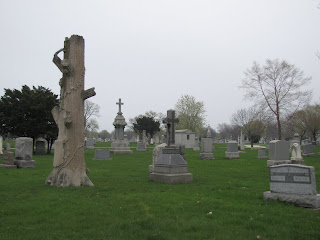 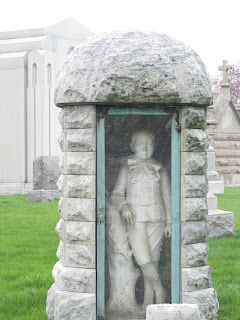 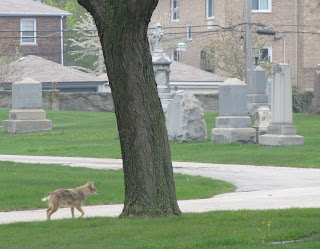 Julie Ferguson said…
Great pictures...those statues are creepy. Too bad Seaweed Charlie didn't make an appearance for you. That would have been a cool experience.
April 25, 2010 at 4:54 PM

I've read the same article at the Daily Northwestern and it was a good one as cheap viagra articles. I really recommend it.
April 19, 2011 at 7:41 AM

Laura in NYC said…
Awesome! I'm from Evanston and I've been to that cemetery MANY times though never heard of Seaweed Charlie. You can read what I have to say here: lauralauras.blogspot.com
June 1, 2014 at 6:06 PM