The Haunting of Holy Trinity 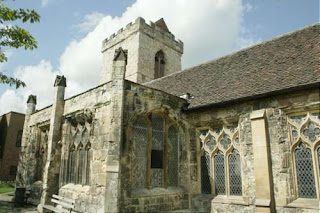 It is Holy Saturday and as a cradle Catholic,  I should be at the Easter Vigil right now.  I should be at church.  The Catholic Tridium of the days leading up to Easter Sunday calls for spending the duration of the week-end at mass.  I thought I would write about one of the more haunted churches in the world instead of going to church tonight.  This way,  I will be in church in spirit if not in body.

One of the most haunted churches in the world is in York, England. Construction on the Holy Trinity Church began in the 12th century and was initiated by the Prior and Convent of Durham and the Archbishop of York.  Like most churches of this time,  it took centuries to complete and became a living part of history for the residents of the area.  If you have read much about Queen Elizabeth I or even seen the movie Elizabeth,  you know who Thomas Percy, Earl of Northumberland was.  He was a prominent Catholic aristocrat who fought to restore Catholic rule to England in the 16th century.   Elizabeth I had him beheaded for treason and his head was put on a pole in Micklegate Bar.  Years later, his head was removed and buried in The Holy Trinity Churchyard.  His ghost is  said to wander this church and many witnesses have seen him wandering the grounds of The Holy Trinity.   The headless ghost of Thomas Percy, has been seen in the churchyard searching for his severed head.

The apparitions of two women and a child have been known to appear usually in front of the east window of the church. There are two stories about the three ghosts. One story is of a mother, her child and the nanny. The mother and child were buried miles away from each other and the nanny brought them together. Another story is the mother and child are buried in the same graveyard and the ghost is an abbess who was killed when she tried to prevent Henry VIII’s army from entering the church during the reformation and taking all the holy relics that the protestants claimed were heresy.

I chose this particular church not only for its history and wonderful haunts, but because it is stunning and beautiful and if I were at church tonight,  this would be the one I would like to be at.   So for now, I'm going to close my eyes and imagine myself in it's haunted halls gazing up at the stained glass portrait of St. Gerome and hope that the imagining counts for this holy day of obligation. 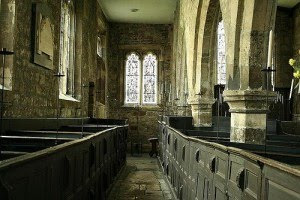 Guvna said…
I just love those old European churches and Cathedrals. They're not only beautiful, but I love history and those old cathedrals are a combination of beauty and history.
April 11, 2010 at 8:49 AM