The Ghosts of Lincoln Park 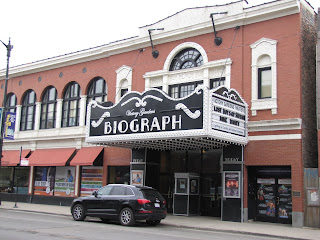 I have been travelling around Chicago today.  The architecture is amazing.  Many of the buildings are little works of art.  They stand out from each other and whisper of secret histories waiting to be unlocked.   Although I haven't been able to unlock the history of the city,  I was able to explore the ghosts of Lincoln Park.  Lincoln Park is filled with little restraunts and shops.   There is a University and students seem to clutter the street with an atmosphere of youth.

Slightly to the side of this and directly across from each other,  sit two of Chicago's most famous haunts.  The first is the Biograph Theater.  It is the oldest movie theater in Chicago and is still a functional theater.  Today it shows independent films and plays.  Tongiht's show is the Lost Boy's of the Sudan.

The Theater is most famous for it's association with the famous public enemy John Dillinger.  It was in front of this theater that John Dillinger was shot next to the notorious and trecherous lady in red.   Of course, there are many that believe Dillinger wasn't shot here, but that it was an elaborate set up.  They believe Dillinger set up a two bit hood who looked a lot like him to take the fall for him.  This hood's name was  James Lawrence.  Those that support this theory say that there were many physical differences between the two that were noticed at the autopsy.   Most Historians maintian that it was Dillinger that was shot.  They point out that Dillinger had little to no willpower and was a chronic criminal his entire life.  He would have popped back up somewhere if he had lived.  He certainly would have returned her his much loved girlfriend if nothing else.  They also argue that despite the small differences,  many people who examined the corpse identified it a Dillinger.

It is said that Dillinger's (or Lawrence's) ghost still haunts the Biograph and the alley behind the Biograph.  I was able to sneak a peak inside the theater and it has been completely renovated and is very modern.  I didn't see any ghosts, but I certainly felt uneasy (maybe because I snuck in).  The alley beside the Biograph is boarded up now and a look behind the boards reveals a disgusting, trash filled gutter that I think even ghosts would be afraid to tread. 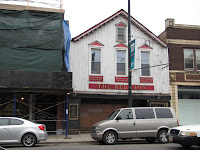 Directly across from the Biograph, is the boarded up remains of the Red Lion Pub.  The Red Lion looks haunted.  It's presence seems to radiate a ghostly qaulity and without even knowing its story,  I knew it was haunted and snapped a picture of it.  Later in the day, I picked up a haunted Chicago book and discovered its story.  The Red Lion Pub was haunted for years by an unknown ghost.  This ghost appeared between three and four every Sunday for years.  Author Dylan Clearfield describes his encounter with this ghost in Chicagoland Ghosts .  He said that he ate at the Red Lion Pub every Sunday for years and for a long time he thought the commotion up stairs was a waitress or staff.  He heard banging and slamming and all kinds of commotion above him as he ate.  It was a long time before he finally asked what they did up stairs to make all that noise.  The owner confessed that no one was up there.  It was the ghost.    Mr. Clearfield hypothesized that the ghost up stairs may have been associated with the night Dillinger was killed, but no one know for sure.  Whatever the case,  this little street in  the Lincoln park are is a popular haunted location and a fun place to sit and eat and contemplate the paranormal.
Email Post

Pam Morris said…
what a shame they have the Biograph all modern and renovated! If I was a ghost, I think I'd move on to something with a bit more atmosphere. A shame the pub is all boarded up, too. A glimpse inside would probably have been rewarding!
April 24, 2010 at 7:15 AM