Big Foot Photographed in my Backyard 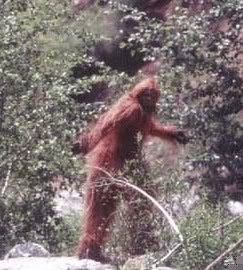 Of course this isn't true. It is April Fools, one of my favorite holidays. The pranks began early in my house. My son was lying on the floor screaming before I even woke up. He had his hands over his eyes and was crying. When he moved his hands, he had bright red fake eyes on that definitely made me jump. Both of my sons were planning pranks all day yesterday. Everything from pens that electrocute you to fake wounds were in the goody bag for today.  I may not survive the day, but at least we will go out with a laugh.

The history of April Fools is a bit fuzzy. In Europe, the New Year used to be a weeklong celebration during the end of March. The last day of the celebration was April and it is thought by many that those who celebrated New Years at this time played pranks on those that did not. The first mention of April fool’s is by Chaucer in "The Nun's Priests Tale."

Here are a few of my favorite April Fools Pranks/Hoaxes.
1. 1996: The Taco Bell Corporation announced it had bought the Liberty Bell and was renaming it the Taco Liberty Bell. Hundreds of outraged citizens called the National Historic Park in Philadelphia where the bell was housed to express their anger.
2. 1998: The April 1998 issue of the New Mexicans for Science and Reason newsletter contained an article claiming that the Alabama state legislature had voted to change the value of the mathematical constant pi from 3.14159 to the 'Biblical value' of 3.0.

3. 1976: The British Astronomical Society announces that due to an eclipse of Pluto by Jupiter the gravity of the earth will be temporarily reduced. It advises people to stay inside. It also notifies people that if they jump up at this time they will float.

4.   1994: An article by John Dvorak in PC Computing magazine described a bill going through Congress that would make it illegal to use the internet while drunk, or to discuss sexual matters over a public network. The bill was supposedly numbered 040194 (i.e. 04/01/94), and the contact person was listed as Lirpa Sloof (April Fools backwards). The article said that the FBI was going to use the bill to tap the phone line of anyone who "uses or abuses alcohol" while accessing the internet. Passage of the bill was felt to be certain because "Who wants to come out and support drunkenness and computer sex?"
Email Post

Nate said…
Heh, heh...those sound like great pranks. I'm not creative enough to pull something off like that, though. I didn't even do ANYTHING this year. I guess I'm getting old. Or boring?

Courtney Mroch said…
HAHAHAHAHAHAHAHA! I so wish I had seen this on April Fool's. This was great. I LOVE pranks! You did a good one!
April 8, 2010 at 8:52 AM