The Ancient Apparitions of Russell Caverns 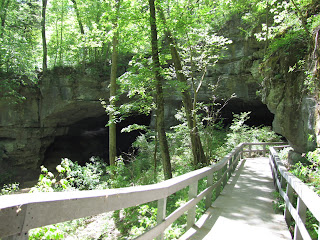 Today we drove North again.  We went on a road trip to find the last pieces of the haunted North Alabama puzzle.   We took our time and stopped to view the oddities along the way.   We stopped at Unclaimed Baggage to view the puppet used for Hoggle in the movie "Labrynth".  He's an odd thing to leave in your luggage, but no odder than the ancient manuscripts and other oddities that are placed behind glass at the Unclaimed Baggage Museum.

Our final destination was Russell Caverns.  Many visitors to these ancient caves have reported seeing ghosts there.   Many have photographed ghosts and others have had ghostly encounters.   The caves were occupied by Native Americans for over 9000 years and archealogical evidence is on prominent display in the cave museum.   It is a short walk to the cave from the museum and it was a lovely day.  They sun filtered through the leaves painting the forest floor like stained glass.   We were the only ones there and the quiet was almost unnatural.  There was no guide and there were no crowds.  We entered the mouth of the cave alone and my son clutched my hand and said he was afraid.

The caves definately had a presence.  It was the type of presence that fills me with an odd calm and a desire to linger.   So we wandered through the small wooded area around the cave and the short path within the gaping mouth of the cavern for some time looking at the displays and reading the plaques.    I took dozens of photos while my boys climbed over the rocks.   My last set of pictures, taken in the same set as the ones above and just a few seconds later, show some very interesting movement.  It was a clear day with no fog or cloud cover.  I'm not sure what is going on in these photos, but I'm open to speculation. 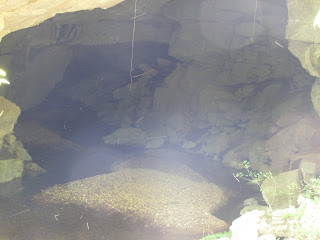 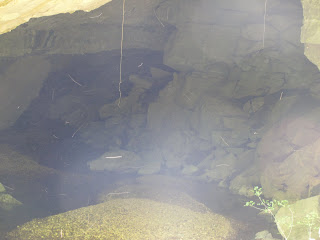 The Wolf said…
Great pics not sure what could be causing the fog like that, I had the same problem with my house when the realiter tried taking pics of the basement to sell the house. The pics were also blurred like the camera had been shaken which I know was impossible because I was beside him when he took the photos
April 18, 2010 at 4:54 PM

Sharon Day said…
Looks like a wonderful way to spend a Sunday. I like the baggage claim museum--what a hoot! The caves would make a wonderful setting for a horror novel...
April 18, 2010 at 4:55 PM

Unknown said…
I dont really like ghost stories but with what I have seen on your blog,I am no more afraid of ghosts.Keep up the good work.
April 19, 2010 at 5:57 AM

Julie Ferguson said…
Sounds like you have a nice trip. That baggage claim museum sounds like a cool place to visit. Love the photos of the caverns but not sure what the fog in the photos could be....humm!
April 19, 2010 at 8:36 AM

Anonymous said…
curiosity don't you think? in all the place in the people tell histories like this, there's always a strange fog surrounding the place, the last time I visited a place like this, I need Viagra to recover my normal behavior.
April 14, 2011 at 1:10 PM