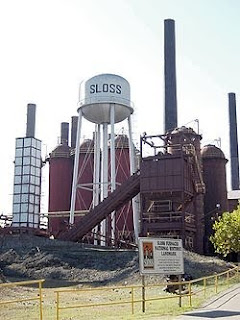 One of the most famous haunted places in Northern Alabama has almost become legend.  It is so well known that I have never blogged about.  I've assumed that I can add no more to the story than what has already been told.  I had a conversation about Sloss several nights ago and realized that there are some places you just can't tell too many stories about.  Sloss Furnace is one of the most well known haunted places in North Alabama.  Located in Birmingham, Alabama, it isn't just famous for the ghosts.  It has become a local center of activities in Birmingham.  It is used for concerts, parties, beer fests, and a million other things. In fact, the first time I went to Sloss it was for a masquerade ball.  I got bored of the party and wandered off and explored.  I didn't find any ghosts but the structure itself lended itself to paranormal thoughts.  It was dark and haunting and just wandering through it at night sent chills up and down my spine.

Sloss Furnace's website describes the furnace and its history:
"The original blast furnaces constructed by James Withers Sloss in the early 1880's served to propel the fledgling city of Birmingham into the pre-eminent industrial center of the South. For this reason Sloss Furnaces is a rich source of local pride and an invaluable part of our collective identity. But the Sloss Furnaces story doesn't end there. We are now looking to the future with plans to preserve Sloss Furnaces and expand on it's base as a cultural icon. You'll find these plans are big and bold, much like the towering smokestacks and enormous furnaces that made Sloss the stuff of legend."

Many of the legends associated with the furnace are of the ghostly kind.  The most famous ghost of Sloss Furnace was that of a man named Theophilus Calvin Jowers. Jowers came to Oxmoor in 1873 around the time that they began making pig iron with coke instead of charcoal because all of the trees around Birmingham had been cut down.  In 1887, he became assistant foundryman at the Sloss Furnace in Birmingham. One day, he was trying to change the bell on the Alice furnace. He was using a block and tackle and was walking around the edge of the furnace when he lost his balance. Both he and the bell fell into the molten iron, and he was burned up. The workmen tried to save what was left of him by using a piece of sheet iron attached to a length of gas pipe, but all that they found were a shoe and a foot inside it.

Shortly after Jowers death the stories began to spread about Jower's ghost haunting the furnace.  Jowers was not the only accidental death at Sloss Furnace, but he is the most famous ghost.  I spoke with the Alabama Parnormal Association (APS) about their investigation of Sloss Furnace and they were able to tell me several interesting stories.  My favorite of these stories had to do with their EVP recordings from Sloss.  They started EVP when they entered the facility.  At some point one of the investigators tripped and fell over for no reason she could explain.  When they played the EVP back,  right before the investigator fell you could hear a man's voice saying "I'm Sorry."
Email Post
Labels: Birmingham Ghosts Sloss Furnace

Sharon Day said…
"Ghost Adventures" went there and I thought it was one of the more promising sites they've been to. I can pick up a lot visually from a place and that one just had an alchemy that seemed perfect for an uncomfortable haunting. I'm glad you covered this one. I had forgotten it was in Alabama.
March 18, 2010 at 8:40 PM

Jessica Penot said…
I had heard it had been on one of the paranormal shows but I wasn't sure which one. It does feel perfect for a haunting especially when you are there at night.
March 18, 2010 at 9:49 PM

Pam Morris said…
wow...never heard of this...but then I'm relatively new to your blog which I am SO glad I found! I really enjoy all the stories/info you relate and look forward very much to hearing about more great haunts!
March 19, 2010 at 6:37 AM

Jum said…
I have been a resident of Birmingham for over 50 years and can recall when Sloss was still in operation. It's hard to believe today that Sloss was set smack-dab in the middle of the east-central section of the city, surrounded by light industry, businesses and slum housing jammed right up against it. The train-station was just 6 blocks away from the smokestacks which belched their dusty-rose iron dust, around the clock, onto every building and parked car unlucky enough to be within 20 blocks. Its sulphur smell gave the whole downtown a slight rotten egg odor. Nice. But that's what it was like in the "Pittsburgh of the South" in the heyday of the steel industry in the 1930's-70's, when homefolks didn't care that a steel furnace was in the middle of the city, just so long as people were working in it.

I remember as a child in the 60's looking down onto Sloss as my family drove by it on the 1st Ave. North overpass which was literally next to the Sloss Works. It was a sight I always looked forward to on our trips to see my grandparents.

At night Sloss was a magical and scary sight to behold. It was a striking scene, with the white-hot heat of the massive furnaces in sharp contrast to the surrounding black night, set against the silhouettes of the girders, raised catwalks and towers. The best time was when they were pouring molten steel. Then the blast of heat from the all-consuming, red-orange liquid metal overwhelmed the night, and thousands of sparks shot out from the pour like angry fire-spirits.

There were several accidental deaths at Sloss, up until the 50's IIRC. They usually involved a mistake during a pour when the river of fire somehow got away from the crane operator and landed on nearby furnacemen, or when someone on the catwalks fell or were knocked into the open vats. It always seemed like such a horrifying way to die, but with the slight consolation that the torment of being burned to death in molten steel couldn't have lasted long. Seems I remember one story of a black furnaceman named Joe who was burned to death during the 40's in one of those terrible accidnts. Seems like one of the paranormal tv programs did a segment on SLoss a few years ago.

This is a pic of the full works:http://addabid.com/Sloss/sloss.gif

Jessica Penot said…
Thank you for the wonderful first hand account of Sloss in it's hay da. Your descriptions are brilliant. It sounds like a horrible place to live near and work at. The smell sounds unbearable and it seems unreal that they would stay in operation with so many tragic deaths. That does sound like a horrible way to die. I love the pic!
March 19, 2010 at 4:58 PM

Courtney Mroch said…
When Ghost Adventures went here it was one of my favorite locations they did. So cool you've actually been there! Neat write up. And the comment Jum left was VERY fascinating. See? If you hadn't written it up there wouldn't have been this extra insight to get about it. Very awesome!
March 20, 2010 at 9:09 AM

Unknown said…
i live in alabama and me and my friends have all been to sloss many times and have each had our own haunting encounter. me and a friend once heard someone running behind us, turned around and no one was there. there were no doors or windows in the hall. just us.

one of my other friends clame to have been pushed down by a man. then looked around and saw no one around anywhere.

there are numerous stories wich i could tell you but i dont have a lot of time on my hands so i must go now. im open to any questions you may have.
-Parker-
October 15, 2010 at 11:37 AM

Unknown said…
Ghost Hunters is airing the Sloss episode tonight, with Meatloaf!! It's a two night investigation.
November 17, 2010 at 5:55 PM

Unknown said…
well.. i was disappointed. dunno what i expected but they had so many ways to cheat very easily. especially meatloaf didnt make it more authentic. it was like he was making fun of the show all the time. prolly because he was witnessing the cheap frauds they made. "can you turn on the flash lamp?" *camera moves away.. "uuuh he really did it" *camera moves back* srsly? maybe the ep was just bad. any suggestions for a really good one?