The Phantoms of The Front Porch Cafe 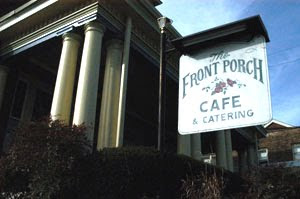 I'm ashamed to say that one of the main reasons I moved away from Murfreesboro, TN was because there was no shopping and few good restaurants there.  Of course,  there were many other reasons to leave Murfreesboro.  There are so any reasons I won't even begin to list them, but the food was one of the biggest reasons.  I had eaten at The Front Porch Cafe on more than one occasion and it was one of the rare exceptions to the lack of restaurants in Murfreesboro.  It was a classic Southern restaurant in an old Victorian building.  We often went for lunch and I often brought my babies.

The atmosphere at the cafe was lovely and it had been decorated to remain contemporary with the building.  The wait time was terrible, but consdering it was one of the few decent restaurants in town, we adapted and waited.  During the many times I ate there,  I had no idea that the building was once used as a funeral parlor.   The room where I sat cradling my youngest in my arms and eating French silk pie, had once been used for wakes.   The room where the I had spent many pleasant afternoons with my lady friends had been used for embalming.   The upstairs,  where the sunlight poured in through the lace curtains onto hardwood floors had been used to house caskets.

All this darkness was a mystery to me when I dined there.  I was unaware that the Front Porch Cafe was one of the most haunted places in Murfreesboro and  that many visitors to this quaint cafe had reported seeing a young girl in a white dress haunting the building.   Others had heard noises and seen lights.  One visitor, who I spoke with on a ghost hunt,  said she had captured the young girl on film.


Not only had the building been a funeral parlor, but beneath the restaurant it's history was even deeper.  Slave tunnels, used in the underground railroad,  are everywhere beneath the old building and some say that the ghosts that haunt the restaurant climb up out of the darkness and find peace in the sunlight of the Front Porch Cafe. 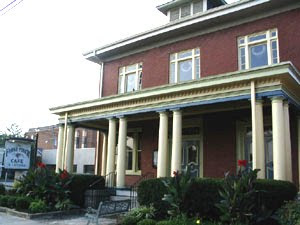 Courtney Mroch said…
You used to live in Murfreesboro? Holy crumb you would've been right down the road then for real. But now they have shopping and food. (Unless you're not a fan of chain restaurants. Then, no, they still don't have restaurants.) However, this post caught my eye because I was like, "What does she have to say about the Front Porch?" So funny! I didn't know it's history. I will be making a Haunt Jaunt down there! (And Wayne'll like it because it's food. I can always get him to go if I bribe him with eating!)
March 21, 2010 at 8:11 PM

Jessica Penot said…
Yes! We lived there before that big new mall went up. I swear they waited for us to leave before they built it. We loved the Front Porch and I just bumped into another haunt jaunter at the depot who told me about its history. I never would have guessed. Enjoy the food while you are there!
March 21, 2010 at 10:05 PM