One of the Most Haunted Places in Alabama 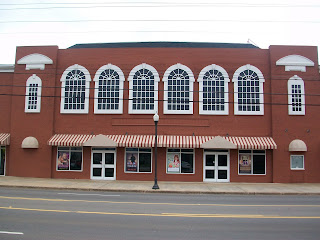 Merrimack hall is tucked neatly away in the West end of Huntsville. The building itself seems oddly out of place here. It is surrounded by tacky strip malls and modern buildings that all appear a bit shabby and rundown. The road in front of it is loud and busy. Everything about this part of West Huntsville is dingy and colorless. Merrimack Hall steps out of this setting like peacock in a barnyard. It is a pretty building that has been lovingly restored to its former glory. It is inviting and before you even walk in you begin to wonder what lurks inside.


Inside, the building is just as beautiful as it is outside. The building was restored by the Jenkins who has turned it into a nonprofit performing art center and a community resource. The walls inside are covered with playbills and programs from all the performances that have shown at this community center. They are also covered in newspaper articles and stories about the way the Merrimac performing arts center has given to the community. It is hard to imagine any ghosts in this exciting environment, but the ghosts at Merrimac Hall are so active and so dark that they have turned skeptics into believers and have made brave men quake.

The Merrimack wasn’t always a performing art center, but it has always been a community center. The early part of the twentieth century in Alabama was ruled by large mills and the microcosms that grew up around them. Huntsville, Alabama’s history reflects this trend. Large mills sprang up around the area that is now Huntsville and in the shadow of these mills, villages grew and thrived. Mill owners provided their employees with housing, schools, and all of their needs.

Merrimack Textile Mill was one of the largest and most successful of the Alabama mills. In July of 1900 Merrimack Manufacturing Company of Lowell, Massachusetts, opened its textile mill in Huntsville and the first village houses appeared in its shadows. When the Mill began operations it had 750 employees who lived in 60 houses clustered around the mill. The Merrimack Mill was an instant success and demand for the Mill’s textiles seemed to grow immediately. This large demand lead to the construction of a second Mill in 1903.

So the Merrimack Village expanded and more houses were built. In order to serve the growing population of the Merrimack Village, the building that is now Merrimack Hall was constructed. This preliminary structure served many purposes. It was a community center even then and was used to house a small school for the children, a bicycle shop, a photo shop, and two barber shops. Merrimack hall served many purposes for the growing community that was bursting out of the seams around it.   Merimack hall served as a community center until the 1980's when the mill finally closed it's doors.
Now, Merrimack hall has been given a new breath of life. It has been turned into a community center again and has rediscovered itself as a place where stage dreams are made real. But the ghosts of those that used to live in Merrimack Hall haven’t moved on. They still cling to their old community center and they don’t want to let go. Merrimack Hall has been the site of continual paranormal activity since its reopening and renovation. Those who have been to the hall have heard phantom voices, seen doors close by themselves, and seen objects move on their own. Some say that Merrimack is haunted by a little boy named Charlie Foster who worked in the mill before child labor laws had made this illegal. They say that Charlie wanders the community center that had been the center of the world in life making mischief.


The Alabama Paranormal Association (APS) investigated the haunting at Merrimack Hall. The Alabama Paranormal Association is a nonprofit group that investigates paranormal activity using technology and reason. They use instrumental readings, eye witness accounts, and history to assess and evaluate whether or not a location is haunted. I spoke with Leilani, from APS about their findings at Merrimack Hall. According to Leilani, Merrimack hall is one of the most active haunted sites she has investigated. She believes that the site is haunted by multiple spirits and that Charlie Foster isn’t the only ghost clinging to the old building.

APS reports that they were able to catch several apparitions on film. Leilani also describes hearing voices, singing, and footsteps on the stage during the investigation. She says that she had a man who was quite skeptical with her. He said that he absolutely didn’t believe in ghosts, but after they saw a full apparition of a man sitting in a chair, he changed his mind. Other evidence that APS caught during their investigation included a very interesting Electronic Voice Phenomena (EVP) recording. During this recording, an investigator asked if the ghosts liked the Christmas lights and a voice on the tape distinctly answered “yes”. One of the investigators had brought their iPod with them on the interview so I could hear the EVP. It was a chilling recording and the voice on the tape sounded like that of a young man or boy. APS felt that Merrimack was one of the most haunted places in North Alabama.
Email Post
Labels: Ghosts Hauntings Huntsville North Alabama

Courtney Mroch said…
What a neat looking building. I'm really digging all the architecture you find to photograph, Jessica. You do such a good job of capturing a place's essence. I've gotta make it down your way. So many neat haunts you have!
March 24, 2010 at 12:37 PM

Jessica Penot said…
Thank you! I just bought I knew camera. I really love architecture and beautiful buildings. Ghost Hunting for me is like getting closer to the beautiful buildings I fall in love with.
March 24, 2010 at 1:23 PM

Anonymous said…
I'm really glad to have found your article. As a Huntsvillian I love or neat history, and am happy to see Merrimack making a worthy stop. The surrounding area is getting facelifted... But the energies get stirred up too...
May 10, 2015 at 6:52 PM

Unknown said…
I'm glad to know that my grandfather (charlie foster) still walks the halls of Merrimack... Makes me feel happy.
September 28, 2016 at 6:21 AM