The Lonely Ghosts of the Detroit Art Institute 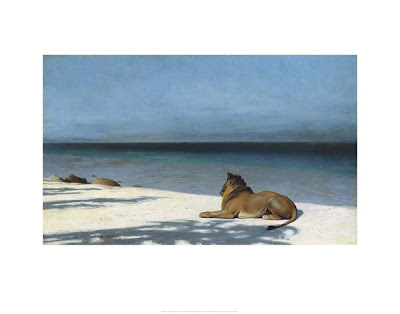 The Detroit Institute of Arts(DIA) is one of my favorite places.  I was an art major at Wayne State University and several of our projects involved going to the museum and studying the art there.  My favorite painting was by Jean Leon Gerome and it was called Solitude.  It depicted a lonely lion laying in the middle of a deserted beach.  The lion appeared to be at at peace.  It's tan main shone in the sunlight against the brilliant azure sky.  Something about that painting, and that place spoke to me.   The DIA echoed the atmosphere in that painting.  It was a quiet museum.  It was not crowded with throngs of people and during the day, when I visited,  I felt like I was the only one there.  I went there in between classes and wandered the lonely halls.  The DIA like the rest of Detroit,  was often abadoned. 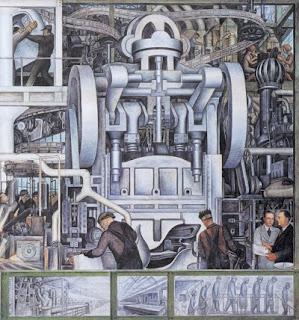 Entering the museum, the first thing you see is a room painted with massive murals by Diego Rivera.  Rivera did these paintings when the museum was founded in 1927.   The museum was built as cultural center for the then beautiful city and the art within the museum reflects the time and effort that was put into the collections.   The Rivera paintings alone are worth a visit.   However, like many places in Detroit,  the DIA is haunted. 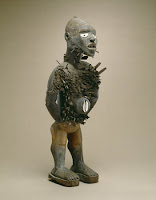 Security gaurds who have worked at the DIA at night report seeing all kinds of strange activity in this museum at night.   Loud thuds echo throught the halls of the empty museum and there are sounds that seem like people are dragging the paintings from room to room.  When the noises are investigated,  all the paintings are where they are supposed to be and the rooms are empty.   Much of the haunting activity seems to surround a statue in the African art gallary called the Nail Figure.  It is the statue of a man impaled with spikes and many gaurds report seeing this statue moving or even dancing alone in the dark.
Email Post
Labels: Detroit Detroit Art Institute Ghosts Haunted Museums Michigan Ghosts

Sharon Day said…
Oh haunted statue--I like that. I'm fascinated by how much objects can affect or create phenomenon. I wonder sometimes if it's just people being sensitive to what's held within the object or if it can truly affect the surroundings. That's a very neat story.
March 8, 2010 at 6:24 PM

scott davidson said…
"I saw this picture in the school library where someone's face was all made up of fruits and vegetables," my son said. "Would be cool to have one of those in my room."
He and I searched for art about "vegetables" in wahooart.com and immediately found this one, http://en.wahooart.com/A55A04/w.nsf/OPRA/BRUE-8BWLKG, by Giuseppe Arcimboldo, which fits the bill to the nearest pear.

L. Shepherd said…
I love the idea of a haunted museum. They are such haunting places as it is, even without any spirits in the vicinity.
January 13, 2014 at 4:33 PM

Unknown said…
I worked at this museum in security for many years. One night I was in my office while one of the officers was on patrol on a afternoon shift.My uniform was a white paramilitary shirt and dark pants while the officers wore blue shirts and dark pants. The officer that was on patrol called me on the radio (He was on the third floor) and asked me jokingly if I was following him. I said I don't know what you mean, I am not following you. He laughed and said I justsaw a small woman with a white shirt with her hair back ( which describes me) walking through the gallery.I told the officer again that is not me. Step over to the nearest phone and call me in the office. He called and I answered. He was so spooked he came back down to shake the chill off. I inspected the entire museum and found no one.
August 26, 2015 at 2:35 PM

Anonymous said…
The story about the nail figure is baloney. A security supervisor cooked it up to discourage a not-too-bright guard on the midnight shift from sleeping in that gallery when he should have been on patrol.

I worked at the DIA for ten years and never heard this story until this incident, after that it spread like the proverbial wildfire.
August 7, 2016 at 3:05 PM