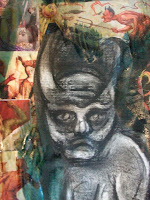 As I was wandering the internet today, I found a wonderful holiday that has been left out of American tradition.  In America, we embrace all cultures and pull their traditions into our own culture and make it our own.  I believe we should do the same for Krampus Day.

Krampus is part of Austrian and Hungarian folklore and is associated with Christams. His name, taken from the Germanic Krampen means claw.   Krampus looks like and acts like the devil.  He is a demon that travels with Saint Nickolas on Christmas Eve and while Santa delivers candies and treats to the good little children, Krampus delivers corporal punishment and horror to the bad little children.  He provides a little extra incentive for the children to be good.  Apparently in Austria, not getting presents wasn't enough to motivate children.  Satan himself had to beat the children with willow branches and carry them off to hell.

Krampus became so popular that his story and legends spread throughout Europe and became especially popular in Croatia, the Czech Republic, Slovakia, Slovenia and northern Italy.   He became so popular that he earned his own holiday.   Dec 5 is Krampus day.  It is almost like Devil's Night in Detroit without the fire.  On Krampus day, young men take to the streets dressed in their most fearful Krampus costumes.  They roam the streets scaring children with loud rusty bells and chains.  They chase down young girls and hit them with birch branches. 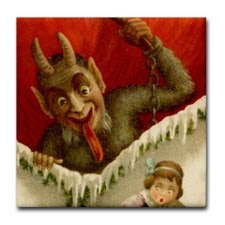 Most pictures of Krampus show him carrying all the bad little children down to hell in a basket he carries on his back.  I believe halmark and party city have missed an enormous opportunity with Krampus Day. 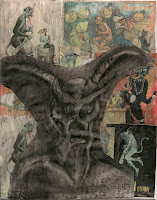 Sharon Day said…
I haven't thought about that for years. I had a friend as a kid and her parents had a painting of Krampus on the wall. They told me the story and I remember thinking he'd be better than Santa at scaring kids. The painting fascinated and horrified me.
March 19, 2010 at 9:00 PM

Jessica Penot said…
He still fascinates and horrifies me. I can't imagine putting a demon in Christmas.
March 20, 2010 at 9:40 AM