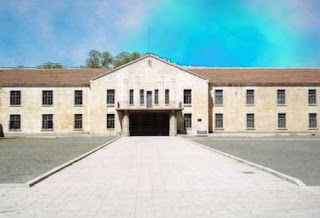 When most people think of the atrocities of World War II, they think of the Germans.  They think of the German concentration camps and the genocide that occurred within them.  They think of the inhuman Nazi experiments and the ability within the Nazis to commit acts that seem impossibly cruel.   Most people don't think about the Japanese.   The Japanese were mostly forgiven for their atrocities following World War II.  Many of the generals involved in the Rape of Nanking and Manilla lived long happy lives surrounded by wealth and their grandchildren.  Their atrocities were forgotten and forgiven.  Yet their evil was even worse than that of the Nazis in some points and made worse yet by the Japanese refusal to admit that the Rape of Nanking, the experiments at Unit 731, and their other great evils even occurred.

During the Rape of Nanking, one of Japan's most notable atrocities, they killed 10,000 a day.  Over 300,00 were slaughtered in less than six weeks.   Japanese soldiers rounded up women and imprisoned them in rape camps.   They forced fathers to rape their daughters, sons to rape their mothers, and participated in the most obscene mutilations of genitals I have ever heard of.  They cut the babies from pregnant women's stomachs and made the mothers watch them kill their babies.   In the Unit 731 Experimentation Camp in Harbin, Machuria the Japanese rounded up local Manchurians and subjected them to the most unthinkable experimentations.  They rounded up entire villages and locked them up and exposed them to anthrax, cholera, and bubonic plague. Live human vivisections were performed and logged carefully.  Torturous experiments were performed night and day and each person was given a number like a lab rat. 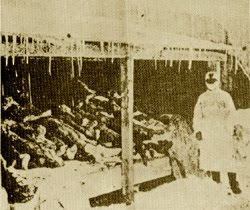 Despite the Japanese denials of such abomination, the evidence remains in photographs and the ghosts that linger behind.  Unit 731, not surprisingly, is considered by many to be one of the top ten most haunted places in the world.  Those that have travelled to the remains of 731 say that their electronic equipment stops working.  Flashlights falter.  Lights fade.   They describe strange noises and the sounds of crying can be heard from a distance. Ghost lights and ghosts have been seen wandering these tragic ruins.  People have seen the ghosts of men and women wandering the site.   Many say the haunting here has become more and more active as the ghosts of the dead cry out for justice.
Email Post

Sharon Day said…
To instigate war is just an excuse for men to go mad. My father was in the Asiatic Fleet fighting the Japanese and he always said we knew little of the horrors. He was in the Phillipines when they rounded up all the American soldiers into POW camps and he escaped with 20 other men on a stolen French merchant ship and landed in Australia. They barely got out of there, but his buddies weren't so lucky.
March 9, 2010 at 3:06 PM

Jessica Penot said…
That must have been terrible for him. I think many soldiers lose a piece of themselves in what they see defending our nation. Your father was a true hero.
March 9, 2010 at 3:57 PM

Courtney Mroch said…
Oh my gosh! DISTURBING! That pic of those heads all lined up...what a find! And so is your post because I had never heard of this Unit 731. (Heard of those kinds of experiments, but never even gave a thought about the place where they were conducted.) New to me! WOOT! (Just sorry about all the suffering that's made it one of the most haunted places. Very sad what we humans purposely do to each other.)
March 10, 2010 at 7:25 AM

David Armstrong said…
I worked as a Railway Police Officer at Newcastle upon Tyne Central Railway Station, England during the 'early 1960'. There was a man (who I saw most days), in this 'thirties' (but he looked very much older). He was employed by the 'L.N.E.R' at Newcastle station to open and shut a 'transit barrier' which lead onto the main railway station concourse. 'He used to just manage' to carry out this task (very slowly and often 'with a struggle') on a daily basis. He had difficulty walking (more of a shuffle) and his body including his face was (extremely pale I thought for his age. I always remember that his body bore a strange 'general twisted appearance'. I can honestly clearly remember, even to this day that he had a distinct 'Sad nervous Haunting look'. I asked him one day as to how he had become 'disabled', he replied with a 'stutter', quote, 'I was in the army and captured by the Japanese THEY USED ME AS BAYONET PRACTICE. I fully believed his story and I swear this is true. David (Newcastle upon Tyne, England).
July 16, 2010 at 7:16 AM

Anonymous said…
Looking back what those Japs did in the second world war, I think they deserve the earthquakes and tsunamis and I don't think we should have any compassion for them. They are actually coward because they never want to admit their past mistakes.
November 1, 2011 at 11:10 PM

Anonymous said…
No country is above nastiness in war. We rounded Japanese into camps during the war. Granted I am not saying killing thousands of people a day is good. But Japan and China have hated eat other for generations. you give people the leeway they will go to some dark places that you never thought capable. Trust and Believe. Ghosts are away of reminding everyone about that fact.
February 17, 2012 at 6:54 AM

Anonymous said…
I create a comment each time I especially enjoy a article on a site or if I have something to add to
the conversation. Usually it's triggered by the fire communicated in the post I looked at. And after this post "The Japanese Atrocities During World War II and the Ghosts of Unit 731". I was actually excited enough to drop a thought :) I do have a couple of questions for you if it's allright.
Is it simply me or do some of the comments look as if they are
coming from brain dead visitors? :-P And, if you are posting on other
places, I'd like to follow you. Would you list the complete urls of your public sites like your Facebook page, twitter feed, or linkedin profile?
My site: SanStreet
January 29, 2013 at 10:53 PM

Anonymous said…
Very nice post. I just stumbled upon your weblog and wished to say that
I've really enjoyed surfing around your blog posts. After all I'll be subscribing in your feed and I'm hoping you write again very soon!
Also see my webpage: Yellow
January 30, 2013 at 12:20 AM

Anonymous said…
Hey there! I'm at work surfing around your blog from my new iphone! Just wanted to say I love reading through your blog and look forward to all your posts! Keep up the outstanding work!

Anonymous said…
Do you mind if I quote a few of your posts as long as I provide credit and sources back to your blog?
My website is in the exact same niche as yours and my visitors would definitely benefit from some of the information you present here.

Please let me know if this alright with you.
Thanks!

Anonymous said…
First of all I want to say awesome blog! I had a quick question which I'd like to ask if you do not mind. I was interested to know how you center yourself and clear your mind before writing. I've had a hard time clearing my
mind in getting my ideas out there. I truly do enjoy writing however it just seems like the first 10 to
15 minutes are wasted just trying to figure out how to begin.
Any ideas or hints? Kudos!

Anonymous said…
Japan will never apologize for the atrocities of Unit 731 for doing so will expose what Uncle Sam did to pardon all 3,000 butchers who worked in that human abattoir. The US was the recipient of all the research conducted in that horrible establishment and gave a pardon to those people(?) in exchange for their data. If that isn't a crime against humanity I don't know what is.
April 19, 2020 at 8:42 AM