Ghosts and the Physiological Response to Fear

As a child, I was fascinated with horror movies and ghost stories and the reactions they created in me.  I enjoyed being a little afraid and did crazy things like reading The Exorcist in the most haunted room in my grandmother's house.  As an adult, I have questioned the nature of fear and wondered where it comes from and why some people are more responsive to different stimuli that others. I've sought to understand what makes us afraid. I have done much of my research on physiological responses to fear. My thesis was called Parasympathetic and Sympathetic Reactions to Fearful Stimulus in Those Suffering from Post Traumatic Stress Disorder. Posttraumatic Stress Disorder is a disorder found most commonly in returning war veterans, victims of rape, and childhood abuse. It is a reaction to being exposed to so much terror that your sympathetic nervous system is thrown off kilter. The sympathetic nervous system is the system that deals with our basis fight or flight responses. It tells us how to deal with fear. The parasympathetic nervous system is responsible for normalizing the body after the fear response is completed.


In my research, I found that the body feels fear before the mind can process it. That means that if I expose you to some stimuli which your find frightening, your heart rate will increase before you can cognitively tell me that you are afraid. Our awareness of fear is based on our physiological reactivity and not vice versa. This is why panic attacks are so difficult to treat psychotherapeutically without drugs. The body has learned to be afraid of an irrational stimulus and will react before the mind can tell it that the fear it is having is irrational. In order to treat panic disorder, the body has to be retrained, not the mind. Exposure therapy is a way of doing this slowly over time and Submersion therapy or flooding is the fast and difficult way of doing this.

For me this is interesting for ghost hunters and paranormal enthusiasts, because we often say we feel something. We say that we feel a presence. That feeling is not rational. We don't think about it. We just know something is there and that produces a fear response. I believe this is a physiological response to something that our normal senses can't perceive but that our body is aware of. Perhaps our sympathetic nervous system is able to sense something that we are not cognitively aware of and this produces a feeling even when there is nothing we can see with our senses. Cognitively, we aren't aware of anything scary. But our body feels that fear. Our body knows there is something there even though we can't see it.   The fear fealing in the presence of the supernatural is an adaptive response to an unpercievable stimulus. 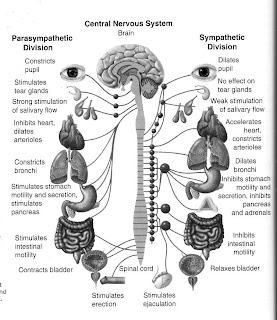 Courtney Mroch said…
Cool article! I liked that you did it from the physical/biological + the psychological aspects of what's going on. In college I did a paper about why people like horror movies and how they're good for us. Now research is finding that horror movies help you think and such. (Improves your short term memory and problem solving and such.) Very neat article!
March 5, 2010 at 1:40 PM

Jessica Penot said…
I agree. I think horror movies are good for you. I think they help us mentally rehearse for danger!
March 5, 2010 at 2:21 PM