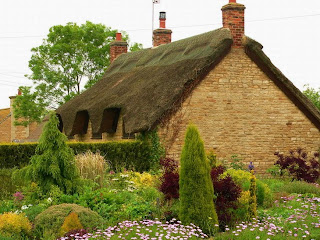 I met an old woman the other night.  She was scattered and talked too much.   Her hair was disheveled and all of her clothes seemed to be slightly askew. She was the type of lady that many people ignore, but if  you stopped and listened to her, her stories were some of the most mesmerizing I had ever heard.

Years ago, this woman had a small cottage in the English country side.  It wasn't much.  It used to be a gardener's cottage.  It had been used for the servants, but this woman adored her cottage and loved everything about it.  She described it in that way that only those who truly love a place can.  She described all the textures colored by the memories of the happiest years of her life.  She spoke of her children playing in the field outside and the steal gray color of the sky.  All these memories poured out of her with utter and complete joy.

She also spoke of the ghosts that had lived with her family and she.  These ghosts had been children and they had appeared to her children first.  She had found her children playing with them and had asked her children who they were talking too.  The children had explained that they were playing with children that had lived in the cottage many years ago.  Of course,  the woman had to research the cottage's history at this point and she found out that the cottage was once occupied by a family and that their children had been lost to influenza around 1900.  This had fed the woman's curiosity and she went out and purchased a Ouija board.   Together,  the woman and her children had used the board to talk to the ghost children and the woman insists that everything that came out of that experience was positive.  She says that the board was a good thing and doesn't understand why anyone would say anything bad about it.   She felt as if her children and she were able to help the ghost children come to terms with their death and cross over.

Of course,  there was a dark side to her story.   The cottage had once been part of a larger estate.  This estate had included an enormous stable for the wealthy owners of the nearby manor house.  The woman says that every time she walked into the stable she was crushed by a feeling so malevolent she never let her children go near it.  She felt that something dark lurked inside the shadows of that building and although she loved her cottage and its pleasant ghosts, she knew that there was a dark side to the spirit world.
Email Post
Labels: English Cottage Ghosts Hauntings ouija

Sharon Day said…
Wow! I love those stories of English countryside. When you think about the sheer numbers of people living there and generations and upheavels and illness and feudal issues...you really get how a place can have lots of lingering spirits. I love that she had such a good attitude with her children. I'd love to stand in that stable and feel it. I try when I go into places with that feeling to take note of it for future reference in my writing. It's hard to describe to people who haven't been in places with lingering dark feelings, but it's really quite unsettling.
March 14, 2010 at 8:09 PM

Jessica Penot said…
I agree. I loved this lady's attitude. It was as if everything were just part of her journey. I don't like to linger inplaces with the feeling in that stable too long and it is impossible to describe unless you've been some place like that.
March 15, 2010 at 5:32 AM

Atrueoriginall said…
What a great story. The woman reminds me of my very German step-grandmother and her stories. Boy oh boy she had a lot of them about the spooks in her house while living in Germany.

My grandmother arrived to the U.S. at the age of 7 and contracted polio pretty much immediately. Consequently, and through the years, she sat an awful lot and had plenty of stories to tell us kids about Germany and her experiences.

She had to leave all friends and family behind when her parents ran to the U.S. with her, but lived long enough to see the wall come down and then passed away.

Anonymous said…
I believe a lot in Ghost Stories because I read some tales in the site buy viagra, I like your blog because it is so spooky.
January 13, 2011 at 1:15 PM