The Cave of Ghosts 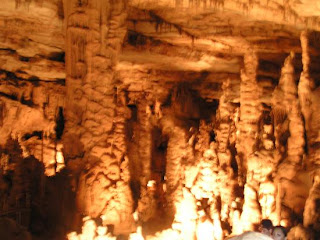 They don't tell you about the ghosts on the tour of Cathedral Caverns. They talk about the cave's history and about Mr. Gurley who discovered the cave.  Although, Cathedral Caverns are ancient,  the enormous mouth of this cave was completely hidden from human view by thick overgrowth and enormous trees.   It was first discovered by Hans Kennamer in 1803 but it wasn't until Mr. Gurly discovered in 1952 that the cave became famous.  Of course, the tour guides don't tell you this either.  In fact, most of what the guides tell you is not true at all.  A cave statistical site I visited confirmed that much of the information you will hear and find about the cave is false.  This false information may be entirely believed by the tour guides, but it is still untrue.
For example, the cave is advertised as having the widest commerical cave entrance in the world, which is a record held in reality by Deer Cave, 100m wide and 120m high, and the largest single cave passage in the world,

As you sort through the many lies and tall tales and strange fantasies your tour guide will tell you about Cathedral Caverns,  you will eventually begin to tune the guide out and study the beauty of the cavern itself.  The cave is incredibly beautiful and doesn't need lies to capture the imagination of visitors.   The caverns are hauntingly beautiful and if you can sense the otherworldly you will feel a chill run down your spine.  You'll know that there is more to Cathedral Caverns than you can see.  If you pull the guide aside,  you'll find the mysterious and true story of the ghosts that wander this cave.  The ghosts that hide here are not human.  They don't speak or interact with visitors.  For the larger part of Cathedral Cavern's history, it was not a place for humans.  It belonged to the animals and when the lights shut off and darkness settles back on the cave, the ghosts of dead animals retake this ancient cavern.  According to one guide I spoke with,  every morning he sees footprints leading back into the darkness of the cave, but none come out.   He also reported strange noises and movements when he is alone in the cave.  Yet despite this, no animals are ever seen in the cave and the cave is far to dark for any animal, except bats and a few bugs, to be able to navigate alone.  The footprints change in shape and size, but every morning they are there,  serving as a reminder of  a time when the cave belonged to the wild and not to the tour guides.
Email Post
Labels: Cathedral Caverns Ghost Animals Ghosts three caves

Courtney Mroch said…
Where is this cave? Have you been to Mammoth Cave? That is DEFINITELY a Haunt Jaunt worth making. (They don't really advertise their ghosts, but there are stories. In fact, in their bookshop there's even a book about all the ghosts in the area.)
March 5, 2010 at 1:53 PM

Jessica Penot said…
I haven't been to Mammoth Cave yet. It is on my to do list. I drive past it all the time and need to stop. Cathedral Caverns are located in North Alabama between Huntsville and Chatanooga. I would love to look at that book on ghosts in the area. I'm taking a trip to Russle Caves that has the ghosts of the Native American's who used to live there next week sometime.
March 5, 2010 at 2:13 PM

Sharon Day said…
Oh, I like that. Makes me think of Wendigos. Caves are so magical, but some are downright dark and I'm not referring to light levels. Very cool place! I would love to see it.
March 5, 2010 at 3:15 PM