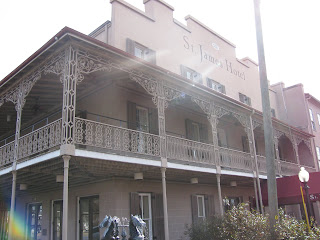 For the last few nights my family and I have been traveling off the beaten path looking at strange haunted places that we might normally miss.  We've thrown ourselves into the middle of things and slept with ghosts and found ourselves in places without internet and places that my GPS can't find.   Our first stop on our travels was the historic St. James Hotel in Selma, Alabama. 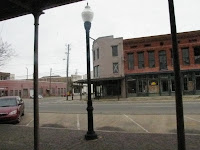 The St. James Hotel in Selma Alabama seems haunted before you even pull up to it. Just driving through downtown Selma to the steps of the hotel makes you feel as if you are driving through a ghost town. The once splendid down town speaks of better times, but has been mostly abandoned so that as you pull up to the St. James, you feel like the only person on earth.


We were the only people staying at the St. James the night we arrived. It was cold outside and the legendary courtyard fountain outside was frozen. The painting of Jesse James’ mistress seemed to follow us with her eyes as we entered. The young man who stood alone behind the desk, Josh, happily pulled out the pictures of ghosts that had been taken throughout the hotel. He also took us on a tour through the elegant dinning room and historically perfect saloon. You could almost imagine yourself stepping backwards in time and seeing Jesse James himself seated in the back corner with his gang. 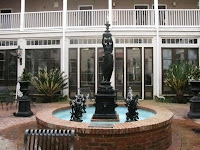 The St. James was once owned by a slave who became the first black congressman. Many of the white locals avoided the hotel because they were racists, but this didn’t stop Jesse James who made the hotel his headquarters in the 1880’s.Since that time, the hotel has been sitting empty.  The hotel was abandoned for over a hundred years and has only recently been rennovated and returned to it's original state.  Many visitors have seen Jesse and his mistress wandering the corridors of the St. James. Others have heard Jesse’s dog barking. A group of psychics reported seeing an entire group of ghosts in the courtyard.

Our stay at the St. James was unnervingly quiet. The hotel groans at night and the doors open and close on their own, but we saw nothing else of the multitude of ghosts that haunt this hotel. Since the hotel was empty, we were able to roam about the place freely and explore every nook and cranny of it. Except for Josh up front, it was just us and the ghosts.

As we wandered the old hotel, we took dozens of pictures, did EMF readings, and asked questions using the EVP recorder. There was no evidence of ghosts in any of this. However, my son’s photos were again filled with orbs and odd shapes. 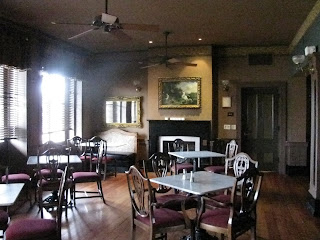 We slept in Jesse James’ room. Josh explained to us that it was the only room in the hotel with a window in the closet because the famous outlaw needed to have a view from all angles. Josh also told us how Jesse checked out of the hotel. He slid out the window in our room and jumped in the river just behind the hotel fleeing from the law. We slept well in his old bed, but we were all awakened on a few occasions by what sounded like a dog. We checked out early after we ate our continental breakfast at Jesse James’ old table and I must say that this old hotel was definitely one the creepiest places I’ve ever slept. 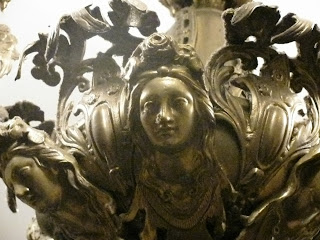 Grim said…
This is cool just from a historical perspective. And to think of all the people that idolize Jesse James just let this place sit for a hundred years is crazy. Must have been cool to reside in the exact same spots you knew he had been. Would love to see it myself someday. Hopefully it's that empty if and when I do.
February 13, 2010 at 7:26 PM

Jessica Penot said…
I have to say that I was happy it was empty from a selfish perspective, but I hope it isn't always that way because it won't last long if it is. I'm hoping their business explodes later in the year!
February 14, 2010 at 5:28 PM

Courtney Mroch said…
OH WOW! What a find! You guys REALLY lucked out to have the place to yourselves and get a private tour basically and all. Way cool!
February 28, 2010 at 8:29 PM

Anonymous said…
Jesse's mistress?Always heard ol' Dingus was a one woman man,Zerelda Mimms,who became his wife!
March 19, 2014 at 10:09 AM