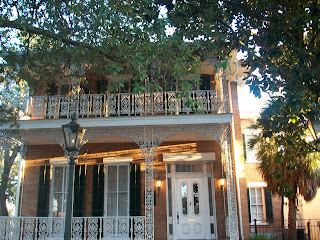 The Quigley House is a perfect examply of a Southern Mansion. Walking by this old house, you might feel like you’ve been swept back in time to the old days of the South when Southern Belles sat lazily on their long front porches drinking tea and fanning themselves. The house has been perfectly restored and is a pleasure to visit and see.


The Quigley House wasn’t always this nice. Forty  years ago the house sat vacant. It had been abandoned and forgotten and had turned into a shell of its former beauty. The Quigley house was originally built by the Gilmore family that lived and died in the house, but it had sat vacant so long many people thought that it was meant to be destroyed. It wasn’t until the Junior Miss program purchased and restored the house that it began to resemble the house it had been.

Unfortunately, all the renovations in the world couldn’t entirely undo the all the damage in the house. Some damage lingers. This kind of damage can’t be seen. It waits in the walls, whispering of secrets of forgotten times and old faces. It comes in the form of ghosts that wander the darkened lonely portions of old houses preventing them from ever feeling entirely new.

Those that now work in the Quigley House are very familiar with the ghosts that linger in its hallways. During the day, when the offices are full, they laugh about it and call the ghost that haunts the house Mrs. Quigley. Sometimes they talk to her and joke with her. They tell Mrs. Quigley to stop all that noise or to turn the lights back off. But when Mrs. Barrow, the director of the Junior Miss program is alone in the house this boldness fades. Mrs. Barrow says the haunting isn’t subtle. When she is downstairs alone, she can hear people walking and stomping upstairs. She hears furniture moving and loud thuds. For a while she isn’t scared, but then she remembers she’s the only one in the house and a chill runs up her spine.

Mobile is famous for its rain storms and often beats Seattle for the title of rainiest city in the country. It doesn’t rain like it does in Seattle, however. The rain explodes out of nowhere and it pours sheets of gray water out of the sky. The storms are violent and fast painting the sky with lightning and fury. During one of these storms, Mrs. Barrow found herself alone in the Quigley House. The streets flooded and traffic stopped. There was no way for Mrs. Barrow to leave. Unable to leave, she had to sit out the storm. She was trapped in the house with all its banging and clanging and for a minute she panicked and almost cried out and fled into the storm. Mrs. Barrow says she will never let that happen again. She’ll never be left alone with the ghosts of Quigley House again. 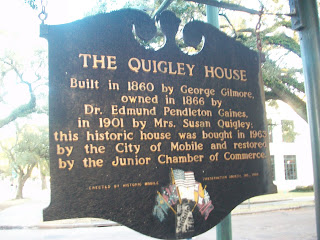 Courtney Mroch said…
Oh wow. This is a beautiful house...and with ghosts! Reminds me of a few places in FL. And I love how you got the sign...I try so hard to get pics of signs, but they never turn out like this. Well done!
February 28, 2010 at 8:20 PM