The Devilish Madame LaLaurie and Her Haunted Mansion 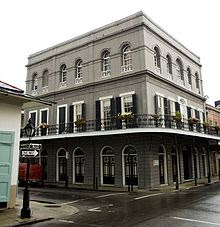 This is a famous ghost story and any google search will produce a plethora of conflicting information on this site. I first learned about this location on a haunted New Orleans tour and although parts or the story may be fiction, if even a portion of the story is true it is horrible. As on most such tours, I never saw anything to indicate a real haunting, but the story is horrifying enough.

Whether the more gruesome elements of this story are true or not, it is true that LaLaurie was a beast and a serial killer and that reports continue that this house is tormented by constant ghosts and spirits. Anyone curious about this house will be easily appeased, as it is a regular part of all haunted New Orleans tours and the guides stories about the house are beyond chilling.  However,  the house's inability to maintain an owner still remains a problem.  Nicolas Cage bought the house in 2007 and it was foreclosed on in 2008.  The house is still vacant and owned by the bank.
Email Post
Labels: Haunted Houses LaLaurie New Orleans Serial Killers

Sharon Day said…
Man, talk about a great foreclosure to buy! I did research on a formula I invented for commonalities in haunted places last summer and this location scored 6/6 on the score sheet and was #17 on a list of 50 random haunted places I chose. Not bad. It has the elements from construction to geology, history to waterways and train tracks. It seems like it would be a great place to imprint a haunting. I've love to go in there and feel the walls and floors. The things I could read from it--especially the attic. Great writeup--this is truly creepy!
February 21, 2010 at 6:58 PM

Courtney Mroch said…
What was it with mean women through history? I think of her story, the lady at Rose Hall (is that the right name...in Jamaica I think it is), and the Blood Countess. Wonder if they're all related? They share so many of the same mean characteristics!
February 28, 2010 at 8:08 PM

jrcolle1975 said…
I just took part in one of the New Orleans ghost tours last month which we by the Lalaurie Mansion and told of bad luck of past owners of this haunted location, namely Nicholas Cage who was foreclosed on after his financial woes began. Supposedly he would not even stay alone in the home overnight. The newest owner is none other than Johnny Depp. Many eerie stories surround it to this day .
February 18, 2012 at 2:28 PM

jrcolle1975 said…
One more interesting little tidbit... soon after Lalaurie and her husband (who was a defunct or self proclaimed surgeon) fled to Europe is when Jack the Ripper began his terrorism of London.
February 18, 2012 at 2:33 PM