The Ghosts of Mackinac 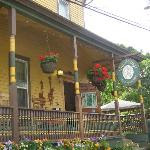 Mackinac Island is a small island pushed up against the North of Michigan in Lake Huron.  For me, this tiny island was a place of magic.  My earliest childhood memories started with trips on the Ferry across the lake to a place that seemed to be trapped in history.  I felt like a time traveller.   I'm not the first person to see this island as magic.  This island was used by the Ojibwa Indians long before the white man ever set foot in the North.   The natives thought that the island was the home of  Gitche Manitou  or the "Great Spirit".  This island was the first land to appear on earth after the great flood and was a magic place where all the tribes gathered in peace.

The French were the first whites to come to this island and they were followed by a long processiong of white men who took this once sacred island and used it for their various purposes.  I will explore these histories more deeply in later blogs about the many historic, haunted places on this mystic island.  Tonight, I will start with a simple Mackinac haunt.

The people of Mackinac take their history very seriously and have worked to preserve it in a way that is unprecedented.  They've worked so hard to preserve it that as you step off the Ferry onto dry land the first thing you will notice is the complete absence of motor vehicles.   The usual noise of traffic has been replaced by the clop clop of horses hooves on the pavement and the occasional ring of a bicycle bell.  The streets are crowded with tourists during the summer.  They come seeking a glimpse into a lost world and a forgotten time.

Bob Hughey decided to open his little restaurant on Mackinac to capitalize on this tourist trade.  He moved there after World War II and his little restaurant thrived in the historic atmosphere of the island.  It did so well he decided to purchase the little pine cottage near his restaurant and expand.   He got much more than he expected, however.    Unknown to him,  in 1942, a woman had been brutally murdered in the pretty little cottage.  Her murder had never been solved and her ghost lingered in the cottage.

Mr. Hughey felt the ghostly presence very quickly and noticed doors opening and shutting and the sound of footsteps in empty halls as soon as he moved in to the quaint cottage.  This was only the beginning for poor Mr. Hughey who went on to be haunted by not only the murdered woman's ghost but multiple other ghosts that seemed trapped in the cottage.   He even walked into his room one night to see a diaphonous woman standing over his bed.   The haunted increased in intensity and malevolence the longer he lingered in his business/home.    He awoke at night to see strange men standing over his bed and the halls were filled with weeping at night.

Mr. Hughey fled Makinac in 1995.  He could no longer take the spirits that had tormented him so long and he moved his restaurant to St. Ignace.   The ghosts remain behind him and the stories of this haunted cottage still bring tourists to gaze on it's darkened windows.  The cottage is now a bed and breakfast and brave tourists can stay in this haunted location and witness the ghosts themselves.
Email Post
Labels: Hauntings Mackinac Island Michigan Ghosts

Anonymous said…
My family goes to Mackinac Island every year, and if you're looking for a good scare, stay at The Inn On Mackinac. It's he creepiest place ever and I'll for sure never stay there again.
January 18, 2014 at 10:47 AM

Anonymous said…
Just stayed here this weekend. All is false. Its adorable.... Famous baseball player Cobb had his honeymoon at the Pine Cottage.
August 10, 2014 at 8:22 AM

Anonymous said…
Lived there. It's creepy but I still survived. I never "saw" anything but had friends who wouldn't visit because of the urban legend surrounding Pine Cottage. Definitely spooky....
September 2, 2014 at 10:29 AM