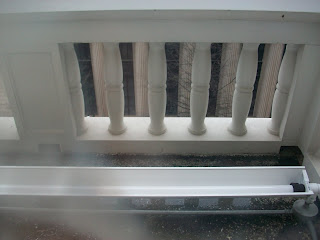 I began my investigations in Birmingham with the historic Tutwiler hotel, which I immediately assumed was not haunted.  I was completely bowled over by the human activity within the hotel and the unhelpful staff.   After the night had quieted and the party ended,  I awoke with the dawn and started again.  My son was more eager than me and was up before the sun taking EMF readings and taking pictures of the room.   I was much less enthusiastic, but he showed me a picture he took of the balcony outside our room with a very odd white form in it and my enthusiasm was restored.

We all got up and went down to torture the morning staff with our ghostly questions. The early morning staff did not have to contend with drunk men hobbling around the lobby or bridal parties giggling at them, so they were much more helpful and they told me in hushed tones about the ghost on the 6th floor.  Apparently, the Tutwiler I was in was not the orignal Tutwiler.  That Tutwiler had been demolished and the building that was now the Tutwiler was in fact an apartment complex called The Ridgely.   On the 6th floor,  a small child had lived and died in her apartment.  None of the staff were sure of her name, but one young man told me that her ghost is known to be particularly active on the 6th floor.  Luckily, our room had been on the sixth floor.   He also said that rooms 604 and 614 had frequently reported seeing her ghost.  Our room shared a balcony with 614, making my son's picture all the more intriguing.  His picture is above. 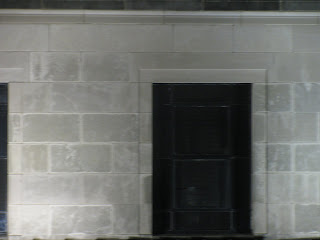 Another side note,   I thought I saw a ghost in the window across from mine last night.  The picture of  what I saw is to the right.  I looked into the history of this building and it is the Birmingham Public library which is thought to be haunted.  Tomorrow's story will give more information on this building and my investigations of it.

The last picture at the bottom tonight is just for fun.   I always find it very strange that Birmingham's five points is centered around a somewhat demonic looking goat man that is strategically placed in front of a church.  Birmingham is a ghost hunter's  dream. 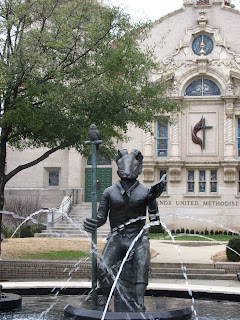 Sharon Day said…
Oh, I love places like that, historic and yet kind of "off" so that you think the whole town has a very guarded secret... Happy hunting!
February 7, 2010 at 9:34 PM

Maggy said…
I do love a good ghost story! check out my blog @ http://fireworkssparklerainbow.blogspot.com/ Thanks!
February 8, 2010 at 9:04 PM