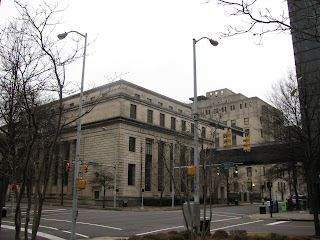 The old Birmingham Public Library is one of the most striking buildings in downtown Birmingham.  It's darkened windows seem to hint at movement even when the library is closed.  Sitting across from the old Library two nights ago,  I thought I saw a face staring out at me.  I watched it and it watched me and for the longest time nothing happened.  I took a picture and went to set the camera down and when I returned it was gone as quickly as it had come.

The building was built in 1927 and was the Birmingham Public Library until 1984.   At this time the primary library was moved across the street into a modern building of glass and harsh angles.  The two buildings are attached by a catwalk and the architectural differerences between these two buildings that are connected like siamese twins are so vast that they should be in different countries.  But the two buildings are bound together by their common purpose.

In 1984 when the old building was partially abandoned it took on a new purpose and became the archives where the old books were stored and the history was kept.  There are no stories of bizarre deaths here.  There are no horror tales of Indian burial grounds or murdered children, but the ghosts that have been described in this building are so terrifying that some of the librarians have refused to go back into the stacks alone and without every light on.  Many staff members know about the haunting in a general sort of way.  They know that doors open and close on their own and phantom noises fill the building when it is empty, but a few report an even more active haunting.

The auditorium is the most haunted portion of this old library and it is in the auditorium that a young librarian described seeing a man appear out of nowhere.   The librarian was mortified and she was even more mortified when he vanished as quickly as he came.    An electrician also saw this man.   He was working on the electrical problems that permeate the building when a man materialized in front of him and vanish again.
Other staff members, have described the elevator moving on it's own and the doors opening with no one in them.  Some people hypothesize that the building is haunted by it's builder, but no one can be sure.  The man that wanders the halls of the library never leaves enough of a trace for anyone to know his identity.
Email Post

Melinda Shelton said…
Check out this video of the Birmingham Public Library's ghost: http://www.youtube.com/watch?v=BfyKegC2c2A
February 9, 2010 at 4:44 AM