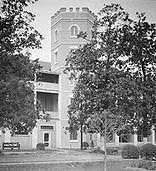 Searcy is one of my favorite haunted places.   I did my internship here a very long time ago and I fell in love with it's history and it's white chipped walls.  Everything about this old hospital spoke to me.  It was even more remarkable because most of those who worked there and lived there every day were oblivious to it's history.  I found this hospital so fascinating that I wrote I book about it which will be coming out this April.

Searcy State Hospital is located in Mt. Vernon Alabama. Prior to being a state hospital the old hospital has a long and dark history that is very difficult to find, but easy to see upon casual observation. The hospital is encased in long, chipped, white walls that seem as old as anything in the United States. From outside these walls, you can see a battered watchtower that gives testament to the fact that the hospital is in the same location as a 300 year old fort. The fort bears witness to American history and was originally a Spanish fort. It switched hands during the Louisiana Purchase and became a US fort. After the US took possession of the fort it was converted to a military arsenal and became known as the Mount Vernon Arsenal. 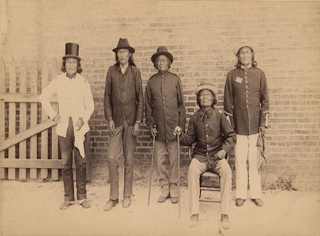 The Arsenal switched hands again several times and was taken by the Confederates during the civil war only to be passed back over the United States again in 1862. From 1887 to 1894, The Arsenal became a Barracks and was used as a prison for the captured Apache people. The most famous of the Apache people to be held in these barracks was Geronimo. The infamous Aaron Burr was also held at this secluded prison at some point.

In 1900 the Barracks were transformed once again and the prison became a mental hospital. Searcy hospital was built as the African American mental hospital in Alabama. Conditions in the hospital were beyond questionable and at one time there were over 2000 patients in the crowded hospital and all were seen by one psychiatrist. All patients were expected to work in the fields.

The hospital was desegregated in 1969, but it’s history is all around it. The hospital is still in used today, and although the residents live in new buildings, many tell stories of ghosts and devils that linger in the white walls and abandoned buildings that surround the new facilities. These stories are usually ignored, because the patients are crazy, but I’m not the only sane person who saw a few ghosts while they were working there.

Sharon Day said…
Oh that is so totally amazing. Somehow, I've never heard of this place. Intriguin. That is the kind of history on top of history, decades and decades of more and more misery, pain, and human anguish that seeps into the very mortar and stone. Thanks for this amazing post! When your book comes out, please let me know. I'd like to make a link on my blog to its sale page as a recommended book. I know it's going to be amazingly cool!
January 13, 2010 at 8:05 PM

Anonymous said…
hello, i found your blog thru autumnforest. i am fascinated my the paranormal.
January 13, 2010 at 9:02 PM

Jessica Penot said…
I don't think very many people have heard of this place. They try to keep it a secret to maintain the confidentiality of the patience. I tried to take pictures one day while I was at work and my camera was confiscated by security.
January 14, 2010 at 8:54 AM

Jessica Penot said…
The book is called Circe and it doesn't come out until April. It's a horror story set in Searcy. I just fell in love with the place and had to write a book that centered on it and it's inhuman occupants.
January 15, 2010 at 7:13 PM

akla52 said…
Wow , I've been there . To see my daddy at the hospital , and they showed me something that one of the Apache indians had written on the wooden door , when he was trapped . I thought it was pretty interesting so I've been searching and looking up things about Searcy , and this was exactly what I was looking for .
April 20, 2010 at 7:55 PM

Anonymous said…
Ive have been a patient at Sercy twice. I heard loud bangs in my locker at night and in the vents. Im graduating with B.A. in Psychology/Sociology. I have no history of mental illness nor do I suffer from mental illness presently. Why I was incarcerated in that place remains a mystery similar to Geranimo. I was in nursing school at the time of my committment. Hauting, ghosts, and witchcraft is an understatement in regards to Searcy, Mt Vernon. I believe this place to be grounds for spiritual warfare!
December 19, 2011 at 10:41 PM

concerned said…
Would you please give me more detail on being a patient there. Were you treated well. Was the facility kept up? I know of someone who is going there and am concerned. I hope they do well. My email address is : sweets793@aol.com
February 2, 2012 at 5:55 PM

Anonymous said…
The things you hear at this place is enough to drive a sane man into being placed into the confines of the place. I worked for the PD of Mt. Vernon and have gone there several times for various reasons. I have seen some things that if told would not be believed. Every time I've been on or near Sercy, I've felt the presence of the paranormal..most in my family including me are sensitive to the paranormal.
July 17, 2012 at 11:18 PM

Sheldon Paige said…
I grew up in Mt. Vernon. I had heard over the years that it was haunted. Mostly from school friends and my dad trying to scare me. I rode the bus to school and we would always have to go up the hill and we would past it. It always seemed creepy to me. Your article is well informative.
October 8, 2014 at 10:41 PM