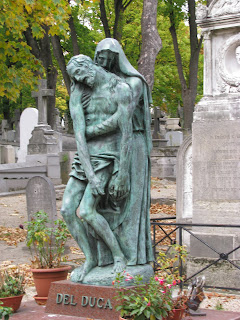 France is filled with beautiful, old places that whisper of ghost stories.  The French, in general, don't seem particularly superstitious.  In Ireland, I would stop and ask about ghost stories and I would find myself sitting for hours listening to so many tales I could hardly write them all down.  In France, I got looks like I had lobsters climbing out of my ears and I got the feeling most people thought I belonged in an institution.  My mother-in-law (From Brittany) would always shrivel her nose when I talked about ghosts and my friend Sonia (From "The Alps")treated me like I was half mad.  So, ghost stories are a little harder to find in France.  Despite the French skepticism, Pere Lachaise feels more haunting than any place I have ever been.  It is breath taxingly beautiful and its ghost stories are many.

The second most haunted place in France is the famous cementery, Pere La Chaise.   As far as I can tell, this necropolis is one of the most beautiful places on earth and the art lurking in the shadows of death in this strange museum put the art in the Louvre to shame.  Pere La Chaise is the most visited cementery in the world and is the final resting place of numerous famous people including Jim Morrison, Chopin, and Oscar Wilde.  The cementary is named for Louis the XIV's confessor.  Napoleon took the land and turned it into a cementery in 1804.   Since the ground wasn't properly consecrated, Catholics couldn't bury their dead at this beautiful necropolis and for many years the cemetery was small and forgotten.  At the end of 1804, only thirteen lonely graves decorated the cemetery.  The cemetery began  a marketing champagne shortly after this that was amazingly successful.  The graves of several famous people including Moliere were transferred to the cemetery and the rest of the dead followed in droves. Since that time the number of brilliant people buried there has grown over time turning a stroll through these hallowed grounds into a small history lesson. 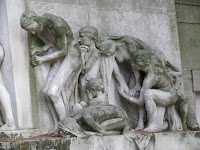 It is not surprising that this cementary, filled with so many dead, is considered haunted.    The most popular story from Pere Lachaise is a tale of Jim Morrison's lonely ghost wandering the tombstones but other visitors report seeing spectral lights and phantoms.  There is even a children's movie called "The Ghosts of Pere-Lachaise".  The ghosts are so well known that they are appropriate for children.  This doesn't surprise me since Pere-Lachaise was my children's favorite place in Paris.  They loved running through the graves and exploring. 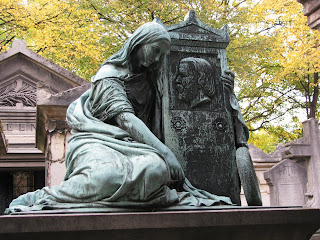 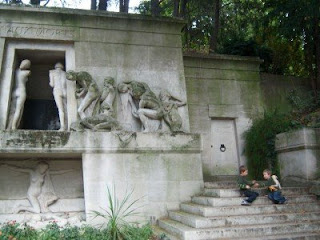 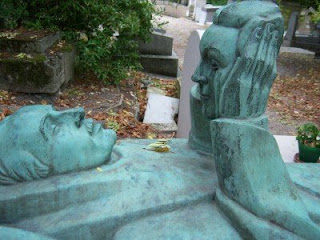 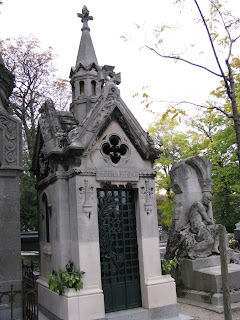 Courtney Mroch said…
Ooo! How exciting! I'm always trying to find haunted places in France. They're not easy to come by. So glad I found this post and your blog. I'll definitely be referencing your posts in the future.
January 10, 2010 at 7:54 PM

Paul Robinson said…
Ah your belle mere probably from the wrong part of Bretagne - my sister in law lives in the Morbihan, and superstitions, folklore, and ghost stories abound (less prevelant chez my beau parents in the Vendée though)! A mad Ulsterman in a French bar, and the mention of Ireland leads to all sorts of tales from the French. Six years living in the north of France "Chez les Ch'tis", and still only visited Paris twice, and never got to do the Le Pere. Montmatre however I can verify, is just as beautiful and quirky. Lovers among the tombstones, and statues and sculptures of death beside them, an odd comparison. Looking forward to the next article. Bon weekend from the Hauts de France biloute.
July 21, 2017 at 8:51 AM

L. Shepherd said…
Wow, the art works there are truly impressive. Usually people just photograph Jim Morrison's grave, and that's all that comes to mind when I think of that cemetery. I appreciate you posting so many interesting pics of other features!
July 21, 2017 at 12:11 PM