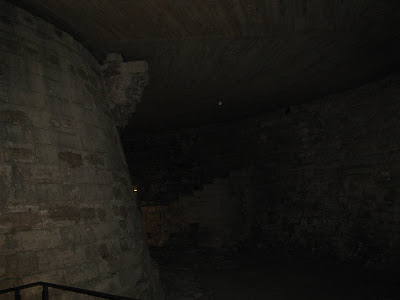 In a write up Haunted American Tours did on the Louvre they wrote, "Many believe that thousands of lost and crazed starving and tortured souls still walk the many gallery's, looking for a way out."   After spending one long day trying desperately to see the Louvre in it's entirety I would say the lost, crazed, starving souls described here must have included me.  It took me almost an hour to find where to eat and I couldn't find my way out of the Egyptian section.

Although the Haunted American Tours write up on the Louvre says that the entire museum is crawling with ghosts,  I only found one placard in the museum commenting on ghosts.  This placard was located in the lonely medieval section of the Louvre.  There are sections of this gargantuan museum that are so crowded, even in the off season, you can barely breath, but the medieval section or donjon of the Louvre is quiet, almost forgotten.   It is beneath the rest of the museum, hiding in it's shadows.  There is no art in the donjon only the long buried history of the museum itself.

The first Louvre was a fortress built at the beginning of the 13th century by Philip II Augustus to defend the Seine below Paris against the Normans and English. It consisted of a thick cylindrical donjon (dungeon) surrounded by towered walls. This château, enlarged and embellished by Charles V in the 14th century, was sacrificed in the 16th century at the end of the reign of Francis I in order to make room for a new Renaissance structure of the same size. Only the west wing and part of the south wing of the projected palace, conceived by the architect Pierre Lescot and decorated with sculptures by Jean Goujon, were finished.

It is in the old donjon that there is a placard that clearly states that there are ghosts in the Louvre.  It tells about the multiple visitors and employees who have encountered ghosts in this once battle torn portion of the old museum. The placard explains that the donjon walls stood against the English and the Normans and saw battles on many occasions so the ghosts could be the ghosts of fallen soldiers or even those imprisoned in the old fortress walls.  Whoever the ghosts are,  it is clear that the older portions of the Louvre are haunted and if you are quiet you can almost hear them.  I think I even see a small orb at the top of a picture I took while I was visiting this haunted location.  It is in the picture at the top of this story. 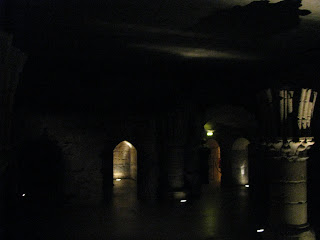 Sharon Day said…
That is wonderful. Somehow, I can't imagine an American museum putting a placard up like that. I'm so glad they credited them.
January 16, 2010 at 10:44 PM

Courtney Mroch said…
Ah...so exciting you went to France. One day, one day. And me, Francophile and Haunt Jaunter, LOVE your posts on France's haunted places. I had a lot of trouble finding stories, especially even 1st person accounts like yours. SO glad you are sharing them!
January 17, 2010 at 7:12 AM

rrodriguez said…
My husband and I honeymooned in Paris. Of the many attractions offered by The City of Lights, The Musee du Louvre was at the top of my list. However, we were unprepared for the frightening and dark feeling we took away from the museum that day. It seemed to begin after we placed our hands ever-so-gently on an ancient Egyptian sarcophagus. It took days to shake it off!
February 4, 2010 at 5:43 PM