The Dallas Mill and Village 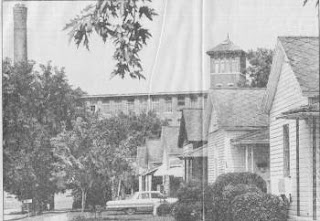 The Dallas Mill is a fascinating place with a history that has been almost completely forgotten.  The Dallas Mill was a cotton mill that was a center of life for those who worked there. The mill was the epicenter of a little city that centered around it. Employees were provided homes, medical care, churches, library, lodge building, YMCA, concerts, a kindergarten, and schools.  The area that surrounded the Dallas Mill was called Dallas Mill Village.  The mill comunity was so tightly linked that they still have a website and community that gathers to remember the good old days of Dallas Village.  Most of the original Dallas Village homes and the Riser School that the mill built for the children have been destroyed or burnt down, only the empty mill remains as a reminder of the once strong community that thrived in it's shadows. 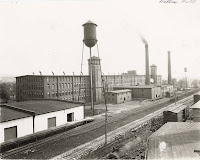 Dallas Mills was begun by T.B. Dallas in 1892 and was Alabama's largest cotton manufacturer.    The Mill closed in 1949 and it's village was incorporated into the city of Huntsville in 1952.  Genesco shoe company bought the building and used it until 1985.  Since that time it has been sitting vacant.  In 1991 there was an enormous fire in the building that burned for three days.  Apparently, at the time of the fire there was a homeless man that was living in the vacant building.  His ghost is said to be seen wandering through the now vacant and burnt remains of the building at night.   Observers say that they have heard his footsteps echoing through the halls and have seen his face looking out through the windows.   It is also said that a man died at the mill cleaning the smokestacks early on and that his ghost also lingers in the shadows of this burnt out, husk of a building.

I travelled to the site where the old mill once stood today and took the pictures below of the old building.  The area that was once the beautiful village  and mill above has turned into a dilapidated, vacant stretch of land that is hidden beneath a network of interstates.  The area itself is haunting. It is empty and dead, as if no new life can find purchase in this once beautiful location.

Anonymous said…
I blog often and I genuinely appreciate your content. Your article has really peaked my interest.

I will take a note of your website and keep checking for new information about once per week.
I subscribed to your RSS feed as well.
My web blog : online slots for cash
January 18, 2013 at 1:57 PM

Anonymous said…
Hello, i feel that i noticed you visited my blog thus i came to go back the
choose?.I'm attempting to to find things to improve my web site!I suppose its ok to use a few of your ideas!!
Have a look at my website :: affiliate programs
January 18, 2013 at 4:06 PM

Anonymous said…
Hmm it looks like your blog ate my first comment (it was super long) so I guess I'll just sum it up what I had written and say, I'm thoroughly enjoying your blog.

I too am an aspiring blog writer but I'm still new to the whole thing. Do you have any tips and hints for beginner blog writers? I'd genuinely appreciate it.
My web page ... forex rate
January 19, 2013 at 7:16 AM

Anonymous said…
It's a shame you don't have a donate button!
I'd without a doubt donate to this fantastic blog! I guess for now i'll settle for
bookmarking and adding your RSS feed to my Google account.

Anonymous said…
Does your blog have a contact page? I'm having trouble locating it but, I'd like to send you
an email. I've got some suggestions for your blog you might be interested in hearing. Either way, great blog and I look forward to seeing it develop over time.

Anonymous said…
Please let me know if you're looking for a article writer for your site. You have some really great articles and I think I would be a good asset. If you ever want to take some of the load off, I'd love to write some articles for your blog in exchange for a link back to mine.
Please send me an e-mail if interested. Thanks!

Anonymous said…
Fantastic beat ! I would like to apprentice while you amend your website, how can i subscribe
for a blog site? The account helped me a acceptable deal.
I had been a little bit acquainted of this your broadcast
provided bright clear idea

Anonymous said…
Hi there! This article could not be written any better!
Looking at this article reminds me of my previous roommate!
He always kept talking about this. I'll forward this article to him. Fairly certain he will have a great read. Thank you for sharing!

Anonymous said…
Wow! Finally I got a weblog from where I can in fact obtain valuable information regarding my study
and knowledge.

Anonymous said…
I do not even know how I ended up here, but I thought this post was great.
I don't know who you are but definitely you are going to a famous blogger if you aren't already ;) Cheers!