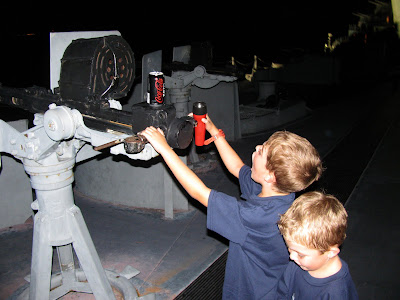 The USS Alabama is a large and impressive ship that is a major tourist attraction for Mobile, Alabama. It has been retired and docked in the Mobile bay and sees thousands of visitors every day. At night, the ship hosts many cubscout campouts so the battleship is rarely empty or quiet. Despite the fact that officials claim the ship is not, nor has ever been haunted, many claim to have seen ghosts on this ship. There have been reports of phantom foot steps and odd noises. It is said that late at night bulkheads open and close by themselves and odd tapping noises can be heard throughout the ship.

The Alabama’s first two deaths were of men who were in the Norfolk shipyard as she was under construction. She was finished in 1942 and served 37 months without any deaths due to enemy fire. As for death under friendly fire, however, there were 8 deaths on gun mount #5 when gun mount #9 fired upon them. It seems that the safety feature that was supposed to prevent the turrets from firing upon each other had failed. The men were completely destroyed; the only thing left of the his gun commander was his boots.

My boys were fortunate enough to spend the night on this wonderful ship this summer. Both of my boys claim that they saw and heard ghosts the night they stayed on the ship. Of course, as normal parents, we shook our heads and said there is no such thing as ghosts. So when I began researching haunted places in Alabama, I was surprised to find out the ghosts may not have been the products of their young imaginations. My oldest son says he saw a barefoot ghost by turret five. I have attached a picture of their overnight to this blog that clearly shows an orb by one of the turrets. The orb is directly above my son's head.
Email Post