My new YA  has just come out!  This YA horror novel is a blend of the dark, horror of HP Lovecraft and the classic gothic, romance Jane Eyre.  To Celebrate, I will be giving away a $25 amazon gift card to the person who can comment below with their favorite Lovecraft story or favorite character in Jane Eyre.  I will give the card away to the best response!  Good Luck!


BUY YOUR COPY OF JANE OF AIR TODAY! 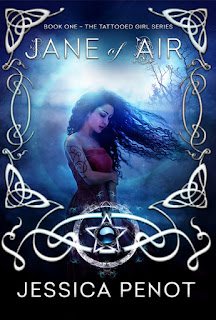 Jane Marsh has spent her entire life hiding. Hiding under bulky clothing. Hiding behind glasses. Hiding behind books. Abandoned at a hospital emergency room at the age of four with her name written on her forehead in black Sharpie and a mysterious tattoo of a door on her back, Jane grew up in foster care in the small town of Gateshead, Massachusetts. She learned early on that keeping her head down and pretending to be normal was the only way to survive.
Now, at the age of sixteen, Jane is looking forward to a fresh start. Hard work and many late study nights earned her early graduation from high school and a full scholarship to a small, but prestigious college in Huntington, Virginia. Even better, her best friend Helen—her only friend actually—is going too. Older by two years, the beautiful and off-beat Helen is the only person from high school who broke through Jane’s shyness and made her feel accepted. As the two girls embark on their new adventure, Jane is feeling hopeful about her future. But with limited resources and no family to help her, Jane takes a job as a live-in companion to a wealthy old woman who lives near the college. She grows to care for the elderly Miss Adele and the kindly housekeeper, Mrs. Fairfax. Jane also falls in love with her new home, the magnificent Thornfield Hall, even though everyone, including Helen, says it’s haunted. Helen begs Jane to leave and move in with her and her boyfriend in town, but Jane refuses. Jane feels at home at Thornfield and its massive library. For a book nerd like Jane, Thornfield is like her very own Gryffindor House.
When Adele’s grandson, Edward Rochester comes home for a visit from Yale, Jane can’t help but be drawn to the brooding, good-looking young man. As tentative friendship blooms between them, Jane believes that maybe, just maybe, she can have a normal life. Maybe even a boyfriend. But then one night Jane begins to hear ghostly whispers that lure her into the dark corners of Thornfield. Wicked whispers about Edward and his past. As the ghosts continue to haunt Jane, her tattoo begins to transform and spread across her back. Soon, Jane fears that Helen was right, something evil does lurk at Thornfield. But is the evil in Edward or in Thornfield itself?
Email Post
Labels: $25 giveaway book releases kindel book releases Paranormal Books Paranormal Romance YA Books YA horror books Young Adult Books Young Adult Horror Books Young Adult Paranormal Books

Unknown said…
Oh o can't wait to read it. I love horror, supernatural, and Halloween is my favorite holiday.

DeadGirl said…
Oh that's such a tough choice!
I love all the Chtulhu Mythos stories but to choose just one piece by him - it has to be Herbert West - Reanimator.

Jessica Penot said…
DeadGirl- Could you email me at Jessica.penot@gmail.com to get your prize?
October 29, 2018 at 8:27 AM