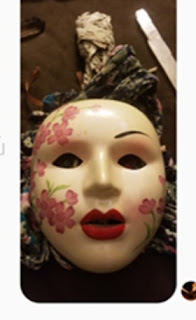 Cursed objections seem abundant today.  All you have to do is search for cursed objects on Ebay to see a million everyday objects that contain ghosts or demons or killed someone.  I believe most of these objects are just things people found around the house and decided to try to sell and make money off of.  I collect historic objects and have bid on Viking antiquities at various auctions.  None of them have contained any curses or malignant spirits.  I even bought a haunted doll on Ebay once out of curiosity.  It is cute, but harmless.  I believe truly haunted or cursed items are rare.

My sister has recently gotten into energy work.  She believes in realigning chakras and helping cleanse people of negative energy.  My sister is also a medium.  One of her clients gave her a mask because the mask "wanted" her and the mask had negative energy.  The client believed the mask was drawn to Rose and had been scared  by haunted activity that had occured around the mask.  I am very honest with my sister.  She knows I am skeptical of her work.  I have a degree in clinical psychology and have practiced for ten years.  I tend to believe in cognitive behavioral theory rather than in misaligned chakras or bad energy.  However, this mask my sister got definitely possessed something.  From the moment it entered her life, it spoke to her.  She had to get rid of it.  Others around her saw spirits associated with the mask.  The previous owner was terrified of it.  After working with the mask, she was able to cleanse it and the ghost she believes she has been able to free the spirit that was in the mask and return it to its original owner.   Although I remain skeptical of my sister's work,  I find it beautiful that she was able to cleanse a cursed object and return it's owner.

Amy said…
Hi Jessica! Had you asked me before our building collapsed 2 1/2 days after putting in it a skull that we removed from a pentagram that I have since discovered was supposed to be containing its evil, I would have said there was no such thing as a cursed object. Yet many, MANY terrible things happened before we finally got rid of the wretched thing. You can read more about it here if you want: https://chattanoogaghosttours.com/the-cursed-skull-of-manchester/
You know me; I am not the superstitious type. But I would not have that thing back in any building I associate with now for all the tea in China.
Your friendly co-author, Amy P. :D
January 16, 2018 at 8:53 AM

Jessica Penot said…
I am so sorry that happened to you. Can I post that on my blog with a link back to your site?

It's not my very first time to visit this blog; I’m visiting this daily and acquire superb info from here day by day.

Hello everyone,The blank ATM card I got from Mike Fisher's blank ATM hackers helped save my life. I was in a very terrible situation financially but then my friend told me about them. I was skeptical about it but he assured me that it worked for him so I ordered one and here I am, back on my feet. Its the best out there with multiple withdrawals up to $80000 per month, easy usage and very safe as well, it's arrival was in less than a week. If there's anyone in need of financial saving you can contact them at blankatm156@gmail.com . I cannot express how grateful i am to blankatm156@gmail.com for placing me in a better financial position. Email : blankatm156@gmail.com
May 4, 2019 at 12:09 PM