The Mysteries that lurk in the Shadows of the House of the Sun King: A True Story 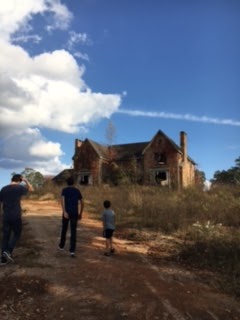 There is an abandoned house at the end of a street in my neighborhood.  For years, it has been a popular spot for urban explorers and kids looking for a bit of adventure. We first noticed the house five years ago when a legion of fire trucks rushed to the woods behind our neighborhood.  We had no idea there was a house in the woods until we saw that someone had attempted to burn it down.  The fire was put out, but once we knew it was there, our curiosity about the house became endless.

The  house is creepy and strange.  The upstairs is laid out like a a daycare and filled with forgotten toys and the downstairs features a massive mural of the sun labeled "The Sun King" in French.  I have written about the house before as it feels haunted and I always believed it was haunted.  It is one of those places that looks haunted from far away and when you step in it the hairs on the back of your neck stand up.

A few weeks ago, they began clearing the lot the house stood on.  The house used to be hidden in a small forest, but all the trees have been knocked down and the house is even more damaged than it had been to begin with.  With the trees down, we could see there was a barn behind the house and there was more to the house than we initially thought, so we decided to go exploring again.  We also felt more free to explore as the gate had been taken down and all the no trespassing signs had been removed.  It seemed open for anyone and there was nothing to indicate we shouldn't explore.  From here, I began to feel like I had walked into a horror movie or murder mystery.  Even as I told my husband about what happened, he laughed and asked me if I was sure I wasn't talking about the movie "Sinister". 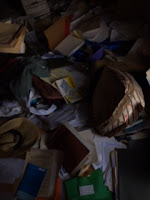 We walked into the house and found mountains of boxes everywhere.  The roof had partially collapsed and boxes from the attic had fallen into the garage.  In the boxes, were the remains of a family's most important documents.  We found social security numbers, retirement funds, bank accounts and access numbers, birth certificates, death records, and court documents.  Family photos were mixed in and laid out naked.  Most interestingly, we found a day planner that had notes in it like "J. shot the dog.  I recorded it.  Police notified."   "Harassment case filed."  "J attacked me again today. Attorney and Police notified."  The further I read the worse it got.  We found letters filing for restraining orders.  The woman who wrote the journal seemed constantly afraid.   She had notes documenting sexual abuse and violence and  animal murder. We kept digging, we couldn't help ourselves and we found that the man and woman who had lived there divorced.  She got the children and accused him of many horrible things.  Clearly, 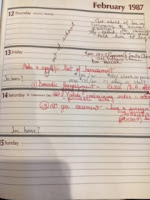 she was afraid.   He wasn't paying child support and was constantly harassing and stalking her.  I liked this woman.  I think she was French.  She had meetings at the French consulate.  She owned horses and was involved in dressage.  I think the barn in the back was for horses.  The woman's notes made her seem like a loving mother who was trying to maintain normalcy but couldn't stop the fear that was a daily reminder of her J.  She obsessed over barking dogs and the neighbor's poodle.  Everything scared her.  It was possible she was paranoid, but I am more prone to believe the fear was based in reality.  At this point, I wouldn't have been surprised to find her skeleton buried in the walls.  It was dark and sitting in this half burnt, abandoned home reading this felt more than a little creepy.  Every stupid, horror movie I had ever seen began flashing in front my eyes.

After we were done with the papers, we explored the barn, where the two cars had just been abandoned.   We are going to continue researching this case because it feels like whatever happened in this house, it couldn't have been good.  The house was abandoned with important documents and notes and cars and records in it.  Someone tried to burn it down.  The woman who had lived there had lived in constant fear of J. who killed her dogs and attacked her.  The house definitely feels haunted by something.  My son and I are going to keep digging because this house feels like it houses a mystery and a haunting that probably shouldn't be forgotten.  So we will keep reading and see if we can find out what really happened in this burnt, corpse of a house.  Maybe nothing special happened, but I still want to know. 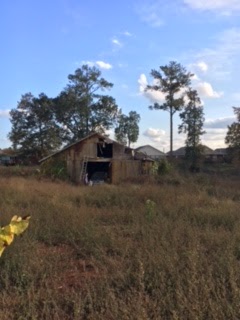 Catherine Cavendish said…
I always find your blog posts fascinating, Jessica and I tweet them so others can enjoy as well.This is particularly intriguing. I look forward to reading what else you find out.
November 5, 2017 at 6:30 AM

Paul Robinson said…
Fascinating. I often find "strong vibes" in places where fear and violence have lived. If you need help with any French documents, or research on the French angle, give me a shout - Ex pat Northern Irish living in the north of France 5Valenciennes, Hauts-de-France). Bon fin de weekend au Chez les Ch'tis biloute!
November 5, 2017 at 7:38 AM