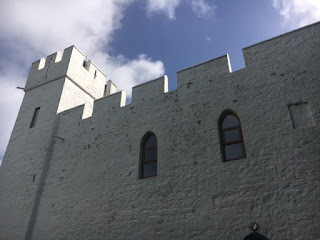 We have now spent a week at Carrigain, sometimes called Cargin Castle.  After our week at Carrigain Castle we discovered many haunting stories.  I have already done one blog post on the castle and I promised a ghost story. The first ghost story comes from David Scully, the boatsman.  He has been helping patrons of Cargin Castle for years now and he recalls helping one woman who was traveling through Ireland on her own.  She went fishing with David a couple of times and was very friendly.  The woman had recently had a spiritual crisis.  She had left the Mormon religion and become an atheist as she was utterly disillusioned with the notion of spirituality and the supernatural from her experiences with the Mormon Faith.  She may have stayed that way if it weren’t for the ghosts of Carraigin Castle.   One morning she called David in desperation.  She told him she couldn’t stay at the castle any longer.  When Davie asked why she told him that she had come to the castle believing that death was the end of all things, but after a few nights alone in Carraigin Castle she knew that death was only the beginning. 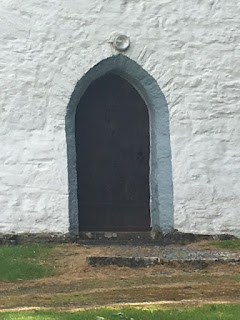 During our stay, we didn’t have any shocking supernatural experiences.  I rarely do.  I have walked through places that others have called the most haunted in the world and seen nothing.  I have slept in haunted rooms and wandered through many cursed places alone at night and seen nothing.  Cargin Castle was not much different.  The only difference was my son, who has watched me chase ghosts since he was little and has come to believe ghosts are nonsense.  However, here at Cargin my son became so afraid he asked me to sleep in the lower level bed chambers with him for one night.  He wouldn’t tell me why, he just said there was something here.  I felt it too.  It was something intangible that passed with the week.  Lights turned on and off .  I had bad dreams and heard footsteps.  All these things could be explained away, but I think there is something here.


Another historical story from this old castle comes again from “Of Beauty Rarest.”  It describes an account of the Ormond Rebellion in the 1570s that was written by Emily Lawless.


“Hught thought that he must certainly be still asleep, for nothing was as it had been when he had gone to bed.  Doors were broken down, there were red lights everywhere, excited tongues of flame were darting here and there into the rafters, and catching at the bundles of dry rushes; the stairs felt slippery under his feet with revolting slipperiness; there was a stinging smell of gunpowder in the air; and prostrate figures-in attitudes that did not at all look like sleep-lay about at every angle of the stairs.  All of a sudden the moon, which had been shinnin in through slit-like windows, dipped and went out behind clouds.  It seemed as if something had met its ciew too ugly for it to go on looking at it a moment longer.


One glimpse Hugh had caught, and only one.  It was the glimpse which he felt quite sure no rubbing would ever get off his brain again.  The great door, sgudded with irnon nails, leading into the hall was half open as he passed in, and instinctively he had glassed in.  It was full of armed men, all wearing the short leather coats and red badges of the De Burghs (the family that held Ashfield Castle in Cong).


There were dead bodies about the floor, the bodies of his uncle’s serving men, lying doubled up in every attitude, and nearest the door lay poor, good-natured, red-headed Christ Culkeen, whom he had been dreaming about, his honest mouth wide open, his innocent, sheepish face white and distorted, his eyes turned hideously back in the agony of his last glance; while at the upper end, just where he was in the habit of sitting, tied to one of his own stone pillars by the arms and legs, with a rope around his neck, his forehead streaming blood from a cut which nearly divided it in two, hugh saw his uncle, Sir Meredith.  You Huber De Burg, the youngest of the Earl’s two sons- the Mac-an-Iarlas as they were called-was standing right in front of him with a look of satisfaction on his handsome, girlish face, stroking down a dainty moustache with one finger, and smiling pleasantly as he eyed his prisoner.  For this was a grudge of many years standing.  Had not Sir Meredith been invited to Connaught by the Dr Burghs themselves, who had give this castle of Cargin to keep? And had he not not in spite of this dared to oppose, and even, on more than one occasion of late, defeat them?  Cerily, it was a piece of presumption for  which he was about to reap a hot and bloody return.”


Indeed there are many reasons for the old castle to be haunted.  Even if it is, it is a beautiful place to stay and I hope that I may return someday.  It is a magical thing to stay in a castle steeped so deeply in over a half of century of history and to call it your own, even if it is only for a week.   I spoke to the owner of Leap Castle last week and I asked him how he felt living in such a haunted place.  He said that the Irish didn't call it a haunting.  He said his castle and spirits and that most of them were positive.  He said spirits were everywhere and there was nothing to fear in them.  I think that describes Castle Cargin.  It is a place with spirits, but it is a wonderful  place.
Email Post
Labels: Caraigin Castle Cargin Castle Haunted Castles irish castles Irish Ghost Stories