A Photographic Journey Through the Catacombs

These pictures of the catacombs are from a Spring Break trip to Paris and they hardly capture the haunting quality of the place.  The photographs were taken by Gabriel Penot.
The arch at the entrance is translated to saying:


STOP:  YOU ARE ENTERING THE KINGDOM OF THE DEAD 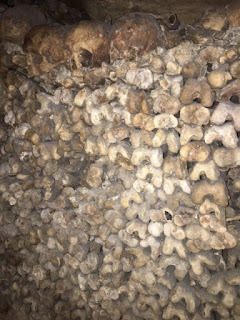 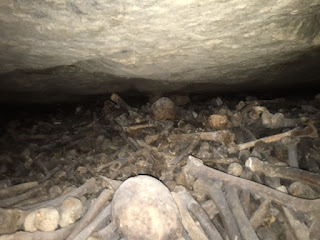 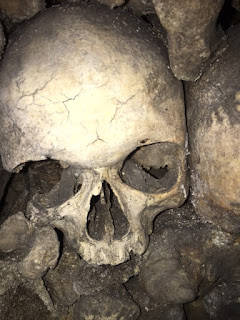 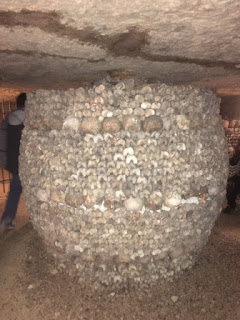 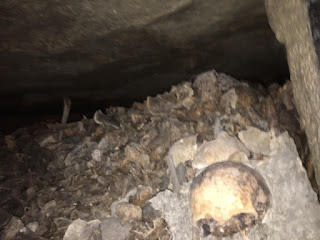 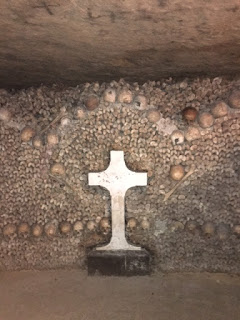 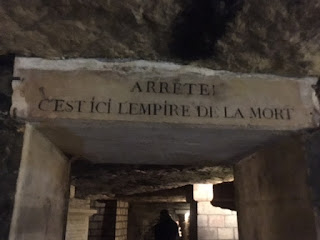 The Catacombs of Paris have always been a source of endless fascination for me.    The catacombs are a series of labrynthian tunnels that burrow beneath the city of Paris.   The walls of these tunnels, or this ossuary, are covered in the bones of Paris's dead.  Opened in the late 18th century, the underground cemetery became a tourist attraction on a small scale from the early 19th century, and has been open to the public on a regular basis from 1867.

The history of the catacombs starts with the booming population of Paris.  As more and more people flooded this populous city, there began to be serious problems with overcrowding cementeries.  Around the 12th century, this problem became more than serious.  The wealthy could still afford expensive cementery plots, but the bodies of the poor were flooding the streets.   As solution to this,  Saints-Innocents cementery was created for the poor.  The poor were buried here in less regal style that usually involved being dumped in a sack into a mass grave.   This solution worked for a while and other mass burial plots for the poor were established.

However, by the 17th century even the mass graves of Saints-Innocents were overflowing and the sanitary conditions around these poor cementeries was becoming intolerable, even by 17th century standards.  The bones of the older dead were exhumed and laid in piles to make room for fresh corpses.  So that the cementery was laden with the unburied remains of the dead.    Luckily, the government was also looking for a solution to dealing with a series of abadoned quary mines beneath the city.   The solutions to the two problems came in the form of the l'Ossuaire Municipal, the official name for the catacombs.

Alexandre Lenoir first had the idea to use empty underground tunnels to the outskirts of the capital to use as the ossuary. His successor, Thiroux de Crosne, chose a place and the exhumation and transfer of all Paris' dead to the underground sepulture began in 1786.  At first the catacombs were merely a place to place the bones of the dead.  It wasn't until Louis-Étienne Héricart de Thury assumed responsibility for the ossuary that it became a work of art.   He rearranged the skulls and bones to create symbolism within the tunnel and also added old cementery decorations to the underground mortuary to turn it into what you see within the catacombs today.

I've spent quite a bit of time on youtube today viewing videos of ghosts visitors of the catacombs have caught on tape. The list is more than lengthy and several people have caught honestly scary images of the spirits of the dead on tape in the catacombs. The stories of ghosts here are more than prolific.  The place is considered to be one of the most haunted places in the world and according to http://www.hauntedamericatours.com/FRANCE.php  the most haunted place in France.   To learn more about the catacombs or to find out how to visit them  go to http://www.catacombes-de-paris.fr/english.htm.