An Ode to The Cabin in the Woods 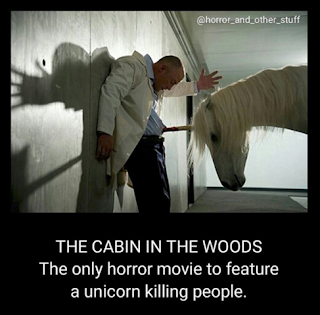 A friend of mine recently posted this cool meme on my Facebook wall and people who had never seen Cabin in the Woods responded passionately about the murderous unicorn.  They clearly didn’t get the joke. I reposted the meme on the page of my favorite H.P. Lovecraft group, The H.P. Lovecraft Historic Society, thinking a group of horror fans would get the joke.  The response was primarily hatred of my use of the word “Lovecraftian” but secondarily showed that not enough people have seen The Cabin in the Woods, Joss Whedon’s loving homage to all things horror.   I am writing this post to encourage people to fix that wrong immediately! As far as I am concerned, this is one of the best horror movies ever made.  It isn’t The Exorcist, but it is something of its own.  It is a love letter to horror tropes and horror writers carefully wrapped in snarky dialogue and obscure references.

For those of you who missed this gem, it is essentially the tale of five college kids who go stay in a cabin in the woods for a weekend.  This is utterly cliché and very purposely cliché.  But beneath all the clichés this movie is so much more.  The opening scene says everything you need to know.  This is actually a deeper story that is carefully crafted to combine every single horror movie cliché into one film.  The cabin in the woods is  a trap designed to create the perfect sacrifice for the old gods who apparently love horror movie clichés.  The teens in the cabin must be sacrificed to one of many horror movie staples.  The board below shows all the possible ways the teens could die.  They chose which horror movie monster will kill them in a scene that whispers of a classic scene from The Evil Dead.  The teens stupidly are lured into a basement where they mess with a bunch of junk.  When one girl reads from the journal of a dead girl, the choice is made and the redneck, zombie, torture family is released from their prison and sent to kill the teens by the keepers of the old god.

The movie climaxes in a blood bath in which every horror movie monster that has been imprisoned is released to feed upon the keepers of the old god.  Clive Barker, Lovecraft, Romero, and Carpenter would all be proud to see creatures reminiscent of their own feed on the blood on the innocent…..ish.  Unicorns and fairies and other silly, nonviolent creatures join the mix for texture.   I have placed a link to the opening scene of this beautiful film below.  Enjoy.